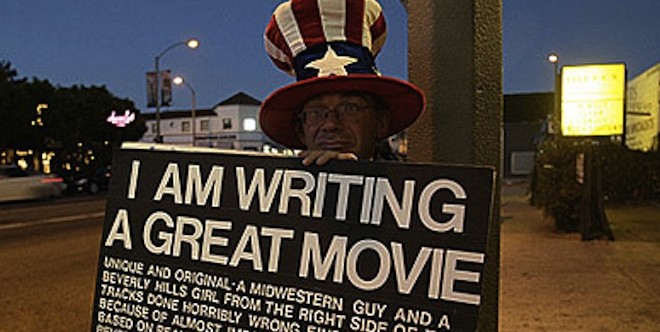 Screenwriting ($2.99) is an iPad app allowing one to draft and edit a screenplay on your iPad.

Hits: Stylish design, featuring easy-to-use options for creating something you hope will fare better than Freddie got Fingered.  Screenwriting also offers the ability to email your script, notes, list of characters, and more from within the app.

Many have delusions that a screenplay floated around in one’s mind will become something more than simply an idea.   Let’s be honest, no one once to wait tables forever, some desire to be the next rags to riches creator of an Oscar-worthy film.  Some want to be videographers and there is a great app for that, Storyboards Premium, but others want to write.

If you fall into that category, but have lacked the proper outlet for getting your vision off the ground, Screenwriting from Web 2 Mobile Design may be the iPad app you’ve coveted.

For $2.99 one can have an app that offers screenwriting from scratch or editing a piece long in the works.

Launch Screenwriting and users can add a project, or import a script in .fdx file format, although the latter caused the app to freeze when I repeatedly tried to import the script of another.

Because importing didn’t work for yours truly, I decided to create a script from the beginning.

After drafting the cover page, I set about creating a scene for my film, “Thoughts of Things I Think I Think.”

Next came character addition.  Beginning from birth, the logical characters to add first were yours truly and my mother.

From then on the meat of this epic starts to take shape with Screenwriting’s options, including:

For those who wish to import/export creations, be warned that the app freezes and support is hard to come by.  Clicking support on the iTunes screen for the app directs one to the homepage of Screenwriting, where no additional support feature can be found.  Frustrating to say the least.

Despite those problems, the remainder of the app’s features work quite well and provide one with the tools necessary to craft the next film any and all may or may not want to see.

If you’re an aspiring screenwriter, pick up the app here and get to work creating something super.