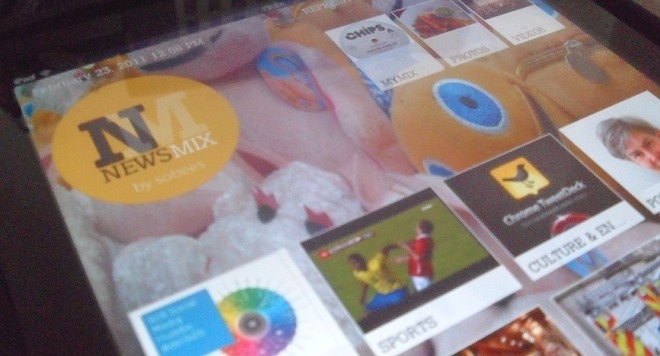 NewsMix is an elegant ‘Social magazine’ app for the iPad that, very much in the vein of Flipboard, pulls in links shared by your Twitter and Facebook friends, displaying them in a magazine format. Now developer Sobees is expanding the service by pushing users’ personalised magazines onto the Web.

On the iPad, NewsMix displays articles in an easy-to-browse format that’s almost, but not quite, as easy-on-the-eye as the genre’s pioneer, Flipboard. However, Sobees doesn’t see the app as purely a social magazine, describing it as “The first application to cover aggregation, semantic enrichment / filtration and sharing/read it later functionalities”. A basic Twitter and Facebook client is built-in, as is Instapaper integration. In a new update to the app, launching today, any articles marked as a favourite in the app will be published to a dedicated website. The beautifully presented HTML5 Web pages (see an example here) essentially amount to another take on the ‘curated newspaper’ idea offered by services like Paper.li and Scoop.it.

You can’t read full articles from the web page, but it does link out to original content. A neat feature allows anyone to get a PDF version of the page emailed to them for later reading. Interestingly, the PDF version does feature full articles.

Reliant as they are on the NewsMix iPad app, we can’t see the curated Web pages taking off as a serious news curation offering just yet, but as an advertisement for the app, it’s a strong one – assuming users take to sharing their pages’ public URLs. In future Sobees plans to make it possible to manage articles displayed on their pages via a Web interface. We recently spotted a job advertisement which hinted at Flipboard heading to the web, although exactly how the developers plan to implement this is unclear at present.

Meanwhile, Switzerland-based Sobees has reduce the price of NewsMix from $2.99 to 99 cents and is planning to introduce a subscription pricing plan in the near future. Although it hasn’t been ironed out yet, a figure of 99 US cents per month, with a discount available for yearly plan. NewsMix is available in the App Store now.