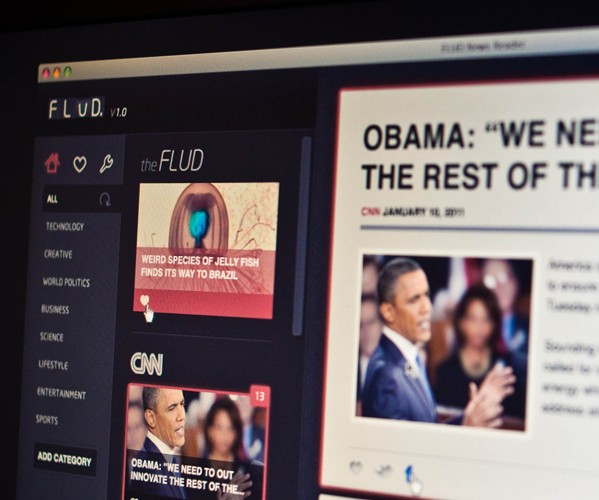 One category of apps for iOS devices not in short supply are news readers.  There are too many to list, with a scant few that truly stand out as great from those that are garbage.

FLUD (free), a news reader for the iPad and iPhone, is one such app which can be described as great, and in the coming weeks is set to get even better.

FLUD was mentioned by apple as the top 3 news apps of 2010 along with Flipboard and Pulse, in addition to winning UI Design of the year by Fast Company.

Nice, but what is FLUD and why should you use it?

FLUD describes itself as:

“a modern, beautiful and personalized news ecosystem that empowers it’s users to engage and broadcast relevant content to their social networks.”

Some of the super features which set FLUD apart from other news readers include:

With background on the super features of FLUD and what the app offers now, here’s  where it stands at present and where this tremendous news reading option is headed.

“FLUD has seen a 600% increase in users since December.. I think this is particularly interesting considering we really haven’t pursued a whole lot of press. Word of mouth is powerful!”

“We have a very engaged user base, in fact I’d say we have a pretty strong brand presence considering that we have users who create their own FLUD tshirts… one created a FLUD cake and another a FLUD cookie… we get a lot of fan art sent to our e-mails as well.”

Impressive numbers, and FLUD has some excellent, new, features in the offing.  FLUD is set to launch an Android soon.   Even more exciting is a the desktop app FLUD is going to launch.  Here’s an exclusive sneak peek of the desktop version, something users have requested in droves:

FLUD is tremendous as is, with many other, similar news readers using features pioneered by FLUD such as, social feeds, categories, bookmarking, video in-app, branded streams and more.

If you’ve yet to try FLUD, you’re missing out.  The features, the wonderful design and the creator’s constant strive for innovation and improvements make FLUD an app you’ll definitely want to pick up, and use time and again.

Have you tried FLUD?  If so, what do you enjoy most about the app, and if you haven’t which feature(s) listed above will drive you to download the app?