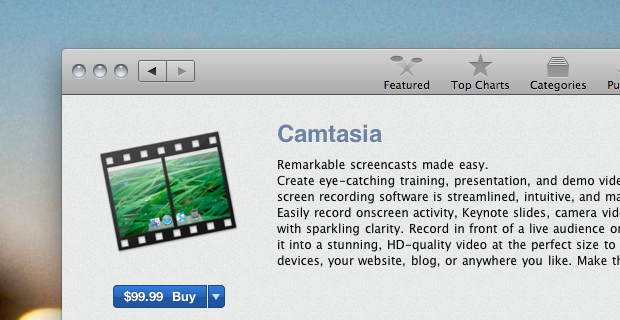 If you’ve not yet used Camtasia for Mac, you’re really missing out. Though there are a number of apps and ways that you can do screencasts on your Mac, Camtasia has been the gold standard and with good reason. It’s really hard to beat the amount of features that are in Camtasia, as well as the quality of the end product.

Previously, you could purchase Camtasia directly through the TechSmith site, and you still can. But if you want the real dish and easiest way to go about things, you’ll want to snag it from its new home in the Mac App Store.

Now, Camtasia is aimed at the professional who wants professional-grade results. As such, it’s priced a bit higher than some of the competition. That fact hasn’t scared people away, though. We’re hearing about new ways that people are using Camtasia on a regular basis.

Want to get started making your own masterpieces? You’ll need to snag a copy. There’s a free trial available, though, just in case you want to give it a try before committing. Of course, it wouldn’t be an announcement if we didn’t have something to celebrate with, right? That said, we have 5 promo codes to hand out to the 5 best comments about what you’d do with your Camtasia for Mac software.

Want to win? You have to comment. So scroll down a touch and get going.