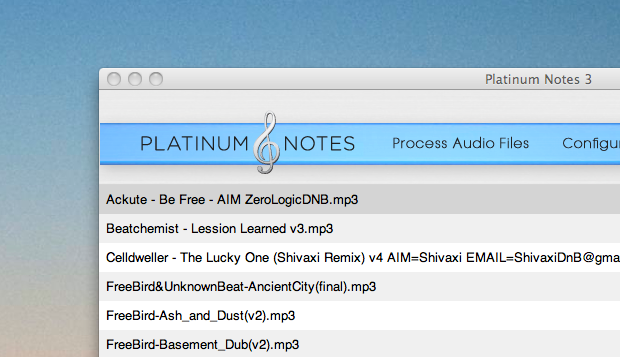 If you’re a true music lover, then you’re already long-heartbroken by the digital transition. Simply put, music had a richer, fuller sound in some analog forms than it ever will again in digital. A few years ago, we started to see the mastering of music get pushed louder and louder. As each of the frequencies got boosted beyond the point that they should, we’ve ended up listening to heavily clipped, over-worked music that brings listening fatigue along with it.

But the problem goes deeper than just listener fatigue. Well-played music has subtle dynamics. In order to get that “louder” feel, every part of the track is boosted, then compressed, then boosted again until there’s no audible difference between the loud and soft parts of a song. In essence, the loudness war has been damaging part of what makes music so spectacular to begin with.

So how do you fix it?

Platinum Notes is a program that, unless you’re a DJ or otherwise work with music on a regular basis, isn’t really directed for your use. But if you love your digital music collection, it’s likely going to save you from the sounds that you didn’t even know were so bad.

At its most simple, Platinum Notes allows you to drag a song into its interface, it then analyzes the track and finds out what’s technically “wrong” with it. A typical poorly-mastered track will have a number of clipped peaks, it will be mastered to a volume level that’s ear-splitting and might even have some tonal issues. Platinum Notes can find all of this information and fix it for you. For a before and after, take a look at the image below:

Obviously, different music sounds better when it has been given different treatments. Bearing that in mind, Platinum Notes will allow you to design different formulae to suit the music that you’re working with. The first tab, for volume and pitch, isn’t overly difficult to figure out. There are some very basic settings that you can adjust without getting into too much trouble. The second tab, for Expansion and Compression, is best left alone if you’re not familiar with the finer points how they work.

By default, the team from Platinum Notes has a template in place that works very well for the vast majority of music. While you might want to tweak things a bit to your own tastes, I’ve found very few songs for which it hasn’t been ideal. Feeling frisky? You can go browsing the selection of templates on the Platinum Notes site to see different ones that might appeal to you.

Your music, once it’s finished, can be output to the directory of your choice. ID3 tags, album art and the rest stays intact and all that you’ll see is a _PN tacked onto the end of your file name to let you know that it has been run through the system. While this might mess with your iTunes library, just know that the end result is worth the hassle.

I’ve been hanging onto a copy of Platinum Notes for a few weeks now. I’ve tested literally over a thousand tracks through it and, although sometimes very subtle, the application almost always makes a track sound better than it did before it was processed. Why, then, have I waited so long to tell you about it? The fact is that Platinum Notes is expensive. At $98, it’s not an application that you’re going to buy on a whim.

After a few weeks, though, I can tell you that I wholeheartedly recommend the app. It’s available as a native application for both Windows and OS X and the support team for Platinum Notes is second to none. It comes down to this — If you really care about your music, then Platinum Notes is a must buy.

Read next: Instagram fires back at PicPlz; releases its API to the developer public