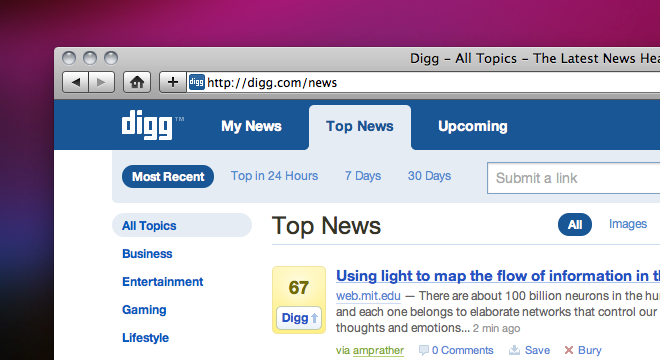 To say that the newest version of Digg was underwhelming would be an understatement. In fact, we here at TNW have seen a dramatic difference in the traffic that Digg used to push when a story would hit the front page. After long-time CEO Kevin Rose stepped down in favor of Matt Williams, the site seems to have spent some time listening to its users.

The first step toward keeping Digg in its glory is fixing some problems with navigation. A tweaked new design should help and the return of the Top News as default is long overdue.

This new design includes a new way to browse between the different sections of the site and an easier way to filter your content. We’ve simplified the design to make stories more prominent and easier to read.

There’s also a new profile statistics widget that has been long in coming. According to the Digg blog, the import from Version 3 of the site took considerably longer than expected. Now, users will be able to see the number of stories that each user has promoted and the percentage of submitted stories that have made the front page.

Finally, the team has integrated a new notifcations panel that will tell you about your promoted stories and what your friends have promoted. You can opt out, of course, but it brings back a bit of the feeling of the old Digg where a story was very heavily reliant on group promotion for its success.

Want to take a look at the changes? You’ll need to select the option to view them. Instead of a hard refresh across the entire site, changes will now be an option.

The changes seem to be great, overall. Time will tell what the community thinks, but the tweets that we’re seeing from some long-time Digg power users appear to be a net positive. Is this the future of Digg that Kevin Rose had in mind? To find out how things seem to have gone wrong, make sure to listen back to our TNW Podcast with Muhammed Saleem and Victor Barrera, two of Digg’s most prolific posters.

Going back to Digg to check out the new changes? Make sure to follow TNW!