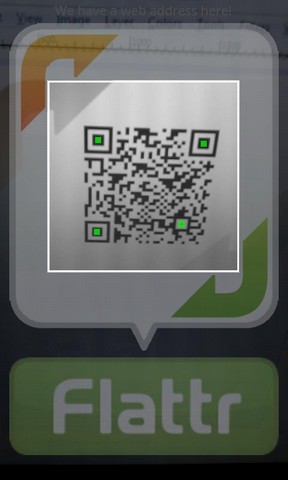 Flattr, the service that lets visitors “tip a dime” to their favourite websites, is now easy to use in the real world too thanks to the launch a new Android app called Flattr4Android.

Let’s say you’re a street artist or a musician; by creating a Flattr QR code and having it displayed when you perform, passers-by can give you money simply by using the Flattr app to scan the code. This is then logged against those people’s Flattr accounts and at the end of the month you get a payment along with everyone else they Flattr-ed both online and offline.

While Flattr-ing real-life people and objects has been possible for some time thanks to FlattIRL which generates suitable QR Codes, the new app ties things together nicely for those wanting to do the actual tipping as it ties directly into their account. Flattr4Android wasn’t developed in-house by Flattr but was done so with its support.

Swedish startups Flattr was founded by Peter Sunde, best known for being a founding member of The Pirate Bay. To date its most high-profile customer was Wikileaks, which added a Flattr button to its Afghanistan war logs page as way of generating income from visitors.

While it’s yet to see mainstream take-up, the service’s potential bringing micropayments into the offline world give it another avenue for growth.

Read next: App Store Classics: No bum notes with Melodica