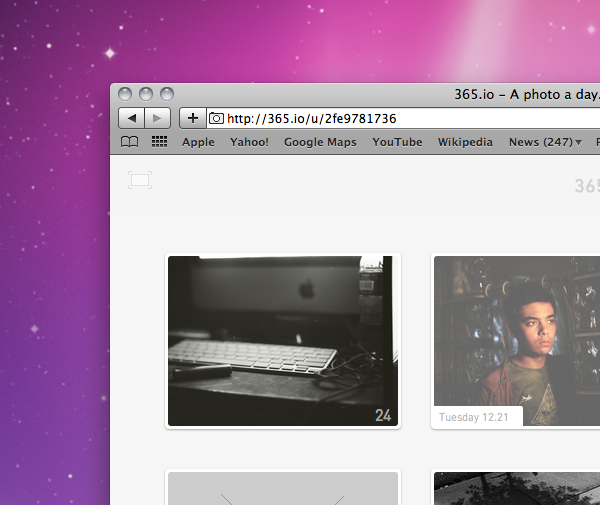 You know, by now, that a 365 photography project is intended to be a compilation of pictures that you take over the course of 365 days. The problem that most of us run into with the idea is that we get lazy about doing it because there’s simply not much motivation involved with it.

365.io is hoping that, by offering you a really slick-looking page on which to display your work, you’ll be more motivated. Oh, there’s also the fact that, in order to use the service, you’ll be paying money. As most parents can tell you, people will respect things that they pay for more than they will those items which are free.

So, how slick is the service? Here’s a look at one public gallery:

Each day at midnight, a new placeholder is opened. As you go about your day, snapping pictures, you can choose to drag and drop a photo to that placeholder (or browse to upload it). What you end up with is a very minimalist, clean-looking gallery to which you are given a URL for sharing.

How is it different? Almost everything we’ve seen when it comes to 365 projects, or photo sharing in general, is massively social. 365.io differs in the point that your gallery is private, by default, and you can choose the people with whom  you’d want to share your URL.

So to answer the question in full, it’s different in just about every way than anything else we’ve seen. In fact, it’s so blatantly against the grain that it truly stands out. That’s not even mentioning the fact that it’s also one of the best looking sites we’ve seen.

While there are other choices out there, including Flickr sets and DailyBooth among others, the idea of a minimalist interface and private gallery is somewhat compelling. The fact that you’ll pay $11 for a year of uploading could very well keep you motivated. Maybe mom was right all along.