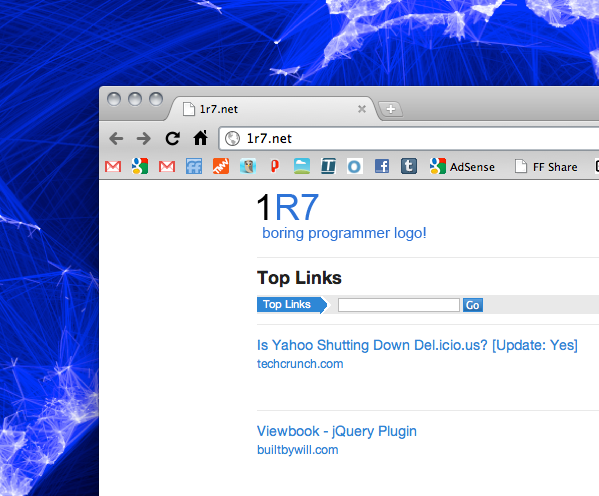 What happens when the rumors start spreading about a virally delicious website like Delicious? The alternatives come to light and the programmers start to get antsy. One programmer, from a thread that we found over on Hacker News, decided that it was high time to build his own Delicious clone, obscurely named 1R7.

The site, which looks like Delicious took on a diet to remove the images, works just as you’d think it would. Bookmarks are saved, tagged and shared around the Internet. Caveat emptor, though:

How stable is it?

Not at all! This project is still extremely young, so don’t go betting the farm on it yet, but please use it, break it, and figure out what could be done better. Call it an early alpha.

It’s easy to get started. You can sign up via Twitter, and there are apparently more OAuth options in the near future. You can even import your Delicious bookmarks, so make sure to give a read of our other article about getting started with exporting and importing.

Though we’ve now been told that Delicious will live, the past couple of days have been enough to raise the question of viable options, While 1R7 is still very young, it’s easily on the right track. Give it a shot, let us know what you think.

Read next: Bank of America now refusing to process payments believed to be for Wikileaks