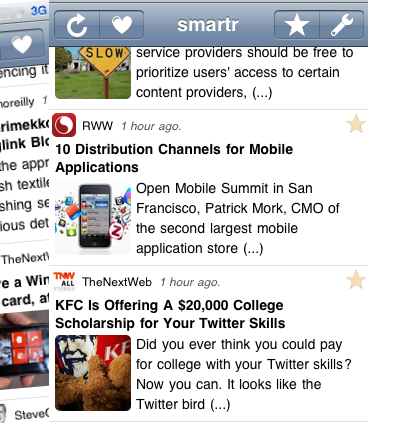 Are you a Twitter user?  Have you tried multiple Twitter apps for your iPhone or iPod touch, but have grown frustrated by having to scroll and scroll and scroll to find news and stories from the sources you hold near and dear to your heart?

Your Twitter frustration is no doubt felt by others, but thankfully there is an app to make Twitter use on your iPhone smarter.  Smartr (free).

Smartr is the perfect way for Twitter users to sort out the mundane Tweets from the great Tweets in one’s stream, maximizing your Twitter use by delivering the news from your Twitter stream in a swift and well-presented manner.

How does Smartr do it?  The app, from Factyle, Inc. finds the links in one’s Twitter feed and turns them into a visual delight that’s dead simple to consume.

Some of the features of Smartr include:

Pretty grand features, but Smartr has made their app, well, smarter with today’s updates.  Smartr now provides users with the following:

Smartr was a good method of sorting through the noise of one’s Twitter stream.  With the additions made in version 1.2, Smartr has turned itself into a resource heavy Twitter users need to have in their iPhone arsenal.