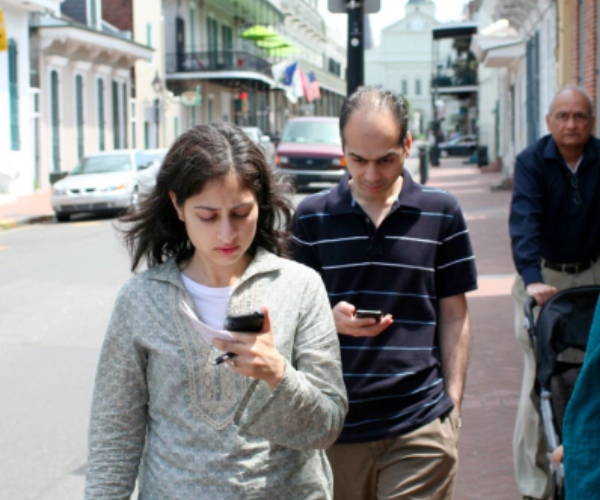 There are 450,000 apps in the Android, Apple and Blackberry marketplace. But 400,000 of them may as well be orphans as they linger on the last pages of options, ineffectively simmering on a metaphorical backburner. The sheer magnitude of available apps is overwhelming, not to mention the enormous amount of copy cat apps that nearly topple the boat. Now take a look at your smartphone. How many apps do you have? I bet a whole lot more than you actually use.

If you want to find a spot to have dinner, do you use Yelp, Urbanspoon or Zagat? (Yelp!) Want to see a movie? Flixster, Fandago, or Rotten Tomatoes? (RT!) Et cetera… So the challenge facing app developers now more than ever is, HOW DO WE GET YOUR ATTENTION?

The answer is relevancy.

So, how can an app developer engage with their user so that their brand continues to remain relevant? Gigaom writer Ryan Kim recently wrote a story titled, “Beyond the Check-In, the Era of Persistent Location Beckons.” In his article, he tells the story of Xtify, a company that is pioneering the wild west of persistent location.

First, it’s important to understand the difference between active check-ins and persistent location, also referred to as passive check-ins. User derived location provided by the user through Facebook Places, Gowalla or Foursquare is an active check-in. Passively derived location, which is now possible through Apple’s iOS 4.0 and the Android OS, is what Xtify is using so that user location is extracted from a smartphone on a periodic and continuous basis.

“Consider the Holy Grail example for the use of location that entrepreneurs have been describing for years,” writes Xtify Chairman Andrew Weinreich. “Someone walks by a Starbucks and a message appears on their phone: ‘Come on in to the Starbucks (you’re a few blocks away and here is a map to get there) and receive 50% off a Frappuccino.’ This example would never work with Places and the Facebook Graph API or any of the other check-in services. With the check-in, Starbucks will only have the ability to message you based on when you tell the service exactly where you are. But what’s the likelihood as you’re walking by Starbucks you decide to check-in to Facebook? For Starbucks or any other business to predictably message you when you’re nearby, they’re going to require access to your location on a persistent and continuous basis. It’s persistent location, not check-ins, that will realize the potential of location-based services.”

“Using persistent location, we are able to send relevant messaging to the user using rich, dynamic push notifications,” explains Xtify’s CEO Josh Rochlin. “It’s relevant because we can capture location to the feature.” Notifications can include rich content including photos, video and QR codes. Xtify, along with Placecast and other similar technologies are setting up “geo-fences,” to corral users and improve relevancy based on location. They build this feature right into the apps through an SDK.

To the consumer, this may sound intimidating. Do you really want to walk down 5th Avenue and have Gap, Starbucks and American Apparel all sending you push notifications? At first, passive location sounds scary. Rochlin is quick to point out that the technology uses fully anonymized user data, that is no emails or cell phone numbers are stored. Also he promises it won’t drain your battery.

But to a brand, this is great news. This kind of technology essentially puts the power back into their hands. And if companies can show a little restraint, like choosing an appropriate time and place to push a message out, this information could be incredibly valuable to consumers. With passively derived location technology, brands can interact with users who might not feel like opening up an app and checking in but would still like to know when they’re walking by a happy hour that their friends have highly recommended.

We’ll no longer have to open up Foursquare, Gowalla or Facebook Places to see if there’s a special. That special will come to us.

“Persistent location has its own challenges associated with users permissioning anonymous access to their location data. This will only happen when the user believes the value derived from the service outweighs any perceived privacy risks from sharing his location,” adds Weinreich. Brands that have started using Xtify include Sam’s Club, Meetmoi, Daily Candy and Playboy, which recently launched a nightlife app called Scout. Consumers who download the respective apps on Android or iPhone have to agree to receive push notifications. If I’m walking down Broadway between meetings, the Daily Candy app sends me a message when I’m near a promotion for a boutique-clothing store. If I am out in Williamsburg at a club, the MeetMoi app will alert me when a cute, single boy is nearby. With Playboy’s Scout I can be in a cab cruising through Union Square and it alerts me to a new restaurant that’s trending positively nearby. Both pieces of information are great to know, and I didn’t have to peruse through my 10 restaurant and shopping apps to find out. While Xtify is building a filter so users can weed out messages they don’t like, I bet the day isn’t too far away when my phone will get smarter over time and simply block out ads it knows I won’t like. For example, I don’t eat steak, so Playboy, please don’t send me specials for Morton’s Steakhouse.

As Kim points out, the concept of persistent location is still evolving, and consumers will have to get used to the idea. But most importantly, this is exciting for companies who will no longer have to strike deals with GroupOn, Foursquare and Facebook as long as they figure out how to strike a balance to please their potential consumer.

Read next: Why Microsoft loves homebrew and hacking