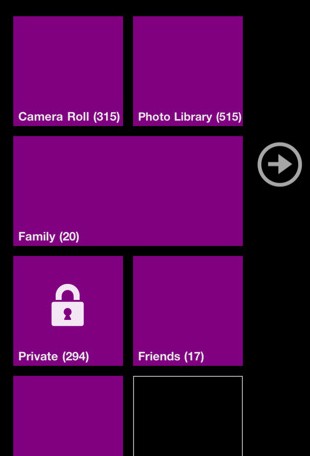 SeeSee gives iPhone and iPod touch users a photo and video management system, which, for those familiar with the new Windows Phone 7 interface, looks strikingly similar.

Hits: View extensive details of your photos, organize them in different albums, protect them with passcode, in addition to easily downloading photos and videos to your computer through WiFi connection.

Since Friday I have had a Windows Phone 7 device in my possession for review (more on that forthcoming).  During my limited time with it, and brace yourself iPhone fanpeople (me included), I’ve come to truly enjoy the user interface.

That said, as an iPhone 4 owner, I wouldn’t trade my device for a Windows Phone 7 but I would choose Windows Phone 7 over any other device on the market.  I like it that much.

Until Apple allows for a similar interface to be ported to my iPhone, developer Chen Ping has created the next best thing.  SeeSee ($.99).

Without explicitly saying such in his description of the app, it’s clear where the inspiration for Ping’s design originated from. SeeSee features the same tile layout of Windows Phone 7, with identical fonts describing the contents of each tile.  Super neat.

After the app launches for the first time, all of one’s camera roll photos and videos are imported to the app.

To add photos and/or movies to different tiles, select the item(s), copy them, and move them to one’s desired title.  Examples of mine below. Some of the other really great features of SeeSee include:

SeeSee is well-designed and provides a really neat alternative to the camera roll on the iPhone.  As a fan of superbly designed apps, and recently, the OS of Windows Phone 7, I believe SeeSee is grand and certainly worth your consideration.

Read next: Svpply is Windowshopping Online, Just in Time for Christmas!