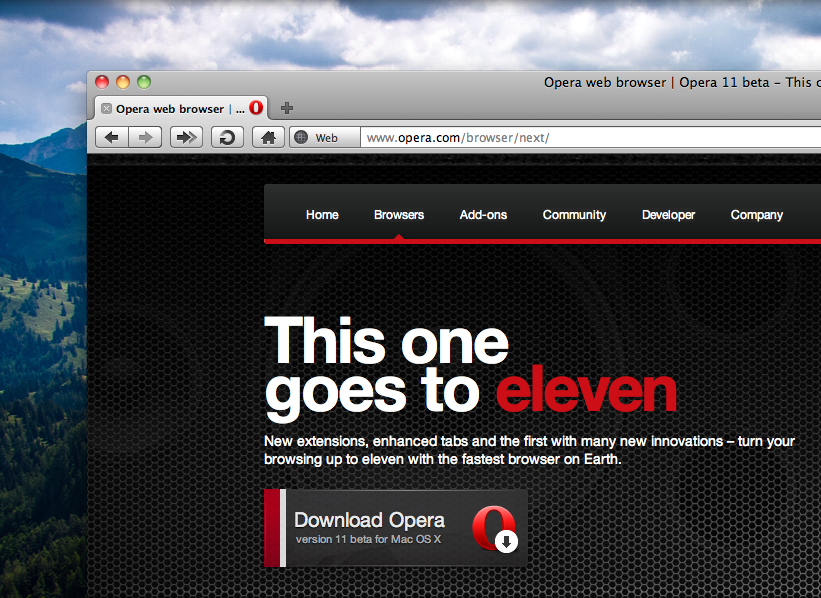 Opera has announced the latest edition of its popular browsing software, making available a new public beta of Opera 11 which comes with a new tab stacking feature and support for extensions.

Opera was one of the first companies to realise tabs inside a browser interface, incorporating them in Opera 1.0. As other browsers have followed and incorporated new tab features, Opera has gone one better and included tab stacking into its new beta, a feature that allows users to better manage their tabs, as if they were pieces of paper on their desk.

To stack tabs, all an Opera user needs to do is to drag open tags on top of each other. As the tabs are added to a stack, a small arrow will appear on the stacked tab demonstrating that other pages are open with it. To view the tabs, the user can simply hover over the the stack and a small preview window will be displayed.

“Tabs are the most popular feature in browsers today,” said Jan Standal, VP of desktop products at Opera. “Because so many of us wrestle with tens or even hundreds of open tabs, we needed a way to simplify tab management. Just like stacking papers for future reference, stacking your tabs is an intuitive way to organize and collect your open Web pages.”

The Opera 11 beta also brings with it support for extensions. In the three weeks following the release of Opera 11 alpha, where extensions officially made their debut, 500000 extensions were downloaded, leading to the submission of between 10 and 20 new extensions a day.

Mouse gestures get an overhaul, mouse paths are now highlighted, plugins can be set to load on-demand and the browser’s file size has been cut by over 30%, even after the addition of new features.

We’ve had the chance to take a look at the browser and it looks like Opera have really pushed the bar with its new feature set. Instead of requiring additional plugins and add-ons, Opera 11 beta includes rich features like tab-stacking and mouse gestures by default whilst delivering websites super-fast.

Opera 11 beta is available on all major operating systems and can be downloaded here.

Read next: Try This: IOGraph turns your mouse activity into a cool piece of art