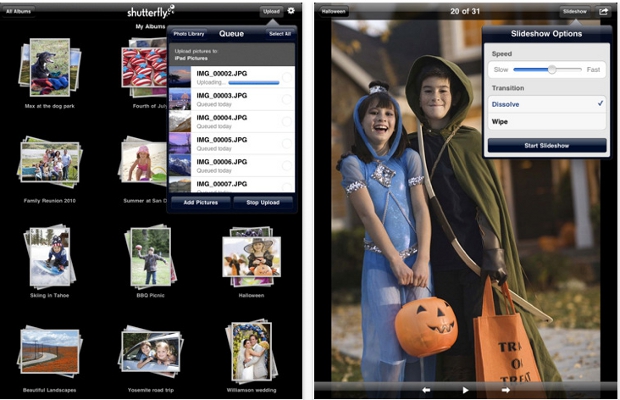 Shutterfly, the digital photo storage, sharing and printing site, released its free iPad app today, that lets you upload pictures to its site right from your iPad as well view and share already uploaded photos.

Loved: Clean design an simplicity, easy and quick uploading, and downloading to the iPad.

Hated: Lack of other sharing options other than Shutterfly’s sharing site and email.

Back in April when the iPad launched, Shutterfly put up a message on its site saying that it didn’t have any immediate plans for an iPad app and that it would wait and see how popular the iPad became first. Well, we all know now how that story would eventually end, and today, Shutterfly released its iPad photo app.

The app is cleanly designed and straightforward, allowing you to quickly login or set up a free account (which we did in seconds) and then start to upload photos right from your iPad’s Photo app (which creates a default “iPad Pictures” folder under My Albums). Uploading photos is as simple as picking the photo you wanted and touching the thumbnail, which puts it into your upload queue. The app mentions when you do your first upload that it won’t be able to upload you pictures at the exact iPad resolution, but that doesn’t seem to be too much of an issue as far as we can see.

After that, uploading was quick and was nice to see a folder auto-generated as we said above. Once you have your photos uploaded, you can them share them via Shutterfly’s sharing site or email. However, those are the only two options at present and it felt kind of limiting, especially the lack of either Twitter or Facebook (of course, Facebook is a major – if not the major – competitor for Shutterfly, especially now that you can print Facebook photos directly from Kodak kiosks).

Another nice touch is that you can also download photos and albums from your Shutterfly account to store them on your iPad.

Slideshows and navigation work like they should and the app does a nice job of rotating pictures with the iPad with no delay whatsoever. Also, in our limited testing, the app did not crash once (that said, the lone review right now in the App Store was complaining about multiple crashes).

Overall, this is a solid – though relatively simply – first run at an iPad app, and should certainly be welcome news for the many Shutterfly users out there.

To get the app, just type in “Shutterfly” in the App Store on your iPad.

Read next: Like to Fish in Alberta? There's an App for That. Seriously.