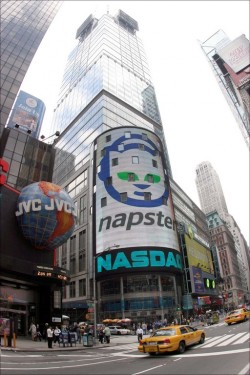 Oh Napster, how you got me through my first years of college.  Downloading my favorite artist’s music at will, discovering new artists time and again, and using a great deal of memory on my old Gateway laptop, yes, those were the days.

Napster, if you’ll remember, was an online music peer-to-peer file sharing service created by Shawn Fanning while he was a college student.  Operating between June 1999 and July 2001, eventually being shut-down, forced into bankruptcy, and other various setbacks.

Napster’s brand and logos were acquired at bankruptcy auction by Roxio, Inc. which used them to rebrand the Pressplay music service as Napster 2.0.  Then, in September 2008, Napster was purchased by US electronics retailer Best Buy for $121 million.

Today, Napster returns with a new option an iPhone and iPad app.  With the app, one can listen to over 10 million full-length songs for just $10 a month.  The app itself is free.

With the apps, one can:

One item of note: Songs saved to your mobile device will only remain playable during your Napster plus Mobile Access subscription membership.

Some views of the new Napster app for iPhone in particular:

If Napster sounds like your cup of tea, download it here.  Napster is offering new users the ability to try it for free, and save 20% when you choose the Napster plus mobile access annual plan.

Will Napster’s new model work?  Do you plan on subscribing to the service, why/why not?

Read next: Urban Dictionary's Definition of "Internet Explorer" is LOL.