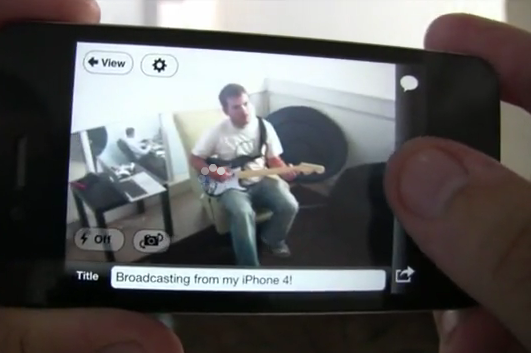 If you’re familiar with broadcasting online, you’re likely already familiar with Justin.tv. The site has been, far and away, one of the leaders for livecasting. Back at the beginning of the month, Justin.tv launched its Android application and saw a huge adoption of the platform from its community.

Not to leave iPhone in the cold, however, Justin.tv today announces the release of its live broadcasting software for the iPhone. Unsurprisingly, the Justin.tv crew expects to see an even faster adoption from the iPhone crowd.

Until now, if you wanted to use Justin.tv while you were out and about, you’d have to use some sort of computer setup or otherwise-expensive workaround. With the release of Justin.tv for two huge mobile platforms, it puts the ability into the hands of any iPhone or Android owner.

While the application is full of cool features, what’s really impressive is the fact that the iPhone application really utilizes the strengths of the device. The full run down? Here you go:

●      Simple, one-click interface. Just click the big red button. That’s it.
●      Broadcast and share instantly via Facebook and Twitter.
●      Chat with friends in real-time within the application.
●      Use the front or back camera, and switch between the two.
●      Roam between Edge, 3G and Wi-Fi without dropping your video stream.
●      Broadcast in landscape mode.

So how does it stack up versus the other applications on the market? From what we can see, it has some pretty big advantages. Video quality is phenomenal, as it uses hardware encoding and high resolution when over wifi, as opposed to frame scraping that is standard on other applications.

You also have full use of your phone’s abilities, such as landscape mode recording, flash control and audio quality switching. Beyond that, however, there’s also the fact that you can set up everything for Justin.tv directly on your phone, without having to visit the website. Pretty slick implementation, honestly.

Of course, none of that matters if you’re not able to have anyone know what you’re doing. Justin.tv has integrated sharing for Twitter, Facebook and the like and you can even chat with your viewers right from your phone.

Have a look at the video, then get downloading and let us know what you think. Justin.tv for the iPhone is available for free from the App Store.

Read next: Kodak unveils a 10-inch version of its Facebook-connected digital photo frame