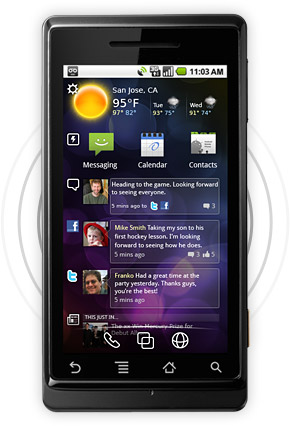 Spark aims to put all of your news streams – including Twitter and Facebook – into one app that acts kind of like a phone homepage in and of itself on Android and Symbian.

Love it: Though we didn’t test it on Symbian, we applaud Spark for trying to bring a more modern UI to the world’s largest mobile platform.

Hate it: Kind of pointless in Android, where in our test of the beta it didn’t work too well and basically created no extra value over the HTC skin already on the phone.

Spark has its heart in the right place with its attempt to bring a modern smartphone UI to Symbian. That said, building this app for Android seems like the wrong idea, as for one, there are already plenty (too many actually) custom skins for Android, and the sentiment among most is that in the future, skins will be mostly replaced by the based Android UI. Spark certainly is ambitious, adding not only Facebook and Twitter streams and updating, but is also geo-aware, and has streams for news, weather, sports and entertainment.

That said, none of these seemed to work particularly well on our myTouch 3G Slide on Android 2.1 (we didn’t have a Symbian phone to test it on unfortunately), and as we said above it didn’t really do anything better than any of our apps or the Android widgets we already had on the phone (for example, it knew which city we were in for the weather but told couldn’t tell us what the weather in our city was).

Perhaps the app works better on other phones/versions of Android, and to be fair this is only a “beta” and the first try (the app is launching today at DEMO). However, we can offer reviews on what we see, and what we saw wasn’t that impressive. It’s a free app available in the Android Market right now, so please give it a shot and let us know if you agree or not in the comments. Again, we applaud Spark develop HipLogic’s idea, but, in Android at least, the execution needs a bit of work.

Read next: Twitter isn't a social network? Says who?