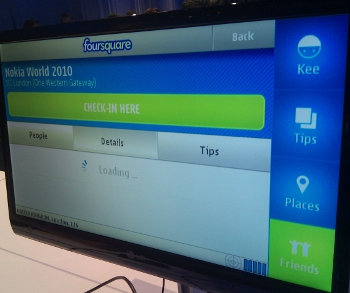 While Nokia’s Ovi Maps service has gained a social check-in service today, support for one third party service is noticeable by its absence.

As we noted earlier today, Ovi Maps, as yet, will not let you check in to Foursquare. Thankfuly, Nokia has been hard at work on an officially branded Foursquare client to fill the gap.

While developed in-house by Nokia, the app has the blessing of Foursquare. Indeed, in a panel debate at the Nokia World event in London today, Foursquare’s VP of Mobile & Partnerships, Holger Luedorf stated that while the company’s growth had been mainly viral to date, tie-ins with mobile manufacturers’ app stores would become increasingly important as it looked to grow further.

Luedorf said they would be looking to negotiate ‘featured’ status in app stores to help expose a wider audiece to Foursquare in the future and would be looking to explore “deeper integration” with mobile manufacturers own services – that sounds just like the built-in Ovi Maps check in service to us.

For now, here’s a Nokia rep demonstrating the Foursquare app, which should be in the Ovi Store within the next week, compatible with Symbian^3, 5.0 and 3.2 devices.