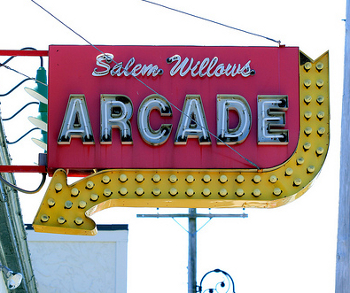 We don’t review many games at The Next Web, but when one as polished and exhilarating as this comes along it’s got to be done.

‘Bullet hell’ shoot ’em ups are a type of Japanese arcade game that combine traditional enemy-blasting with psychedelic waves of bullets that fill the screen. Surviving becomes a delicate act of weaving around the screen while mastering often complex point-scoring tactics.

One of the masters of this sub-genre is Cave, and DoDonPachi Resurrection is the developer’s second outing on iOS. What they’ve achieved here is astounding. It’s a smooth, fast and intense experience that’s true to its arcade roots. With OpenFeint integration, it has built-in achievements to unlock and online ranking to show just how much better other players are than you (at least at first).

One problem with this being such a polished, high-pace experience is that older iPhones and all current iPod Touches simply can’t keep up. You’ll need an iPhone 4 or 3GS to use the game, but it really comes into its own on the iPad. Upscaled in ‘2x’ mode, there’s minimal pixelation and there’s much more room to move your finger around to control your ship than on the more cramped iPhone screen.

Speaking of control, games like this often suffer when ported to a touchscreen mobile environment. Not here – DoDonPachi Resurrection is a joy to play, and you never feel like the controls have let you down. If you die, it’s your fault; just restart and have another go. If you’re like me you’ll find it hard to stop.

Read next: Ever seen a goose go after a dog? No i hadn't either. [video]