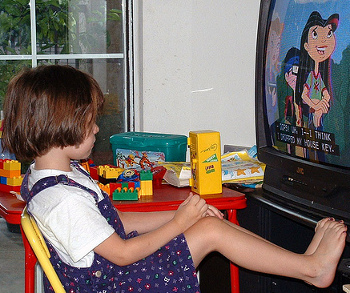 It’s perhaps a little surprising how unsocial online video currently is. The next generation of TV is likely to change that, but for now we’re mostly limited to watching videos on our own and then sharing those we like with others via links.

Last year YouTube trialled a realtime sharing bar that allowed you to see what your friends were watching, but it never went beyond testing on a few accounts and has since been ditched. Meanwhile, New York-based Qlipso has gone all the way and turned social interaction into the focus of online video viewing.

After acquiring video platform Veoh earlier this year, Qlipso has now integrated its social features into every video on the site. Click the “Share live with friends” button on any Veoh video and a full-page app is launched with the video at the centre and a chat room, 3D user avatars and the ability to share other media such as videos, music, games and photos. The service works both live (with friends watching the video simultaneously) or asynchronously, with friends dropping in to the social activity over time.

It certainly transforms online viewing into a more interactive experience. Qlipso’s CEO Jon Goldman tells us “It focuses on the user and his/her friends, while having the content serve as the context for socializing, rather than the main attraction.”

Since acquiring Veoh, the Qlipso team has reworked the YouTube-like site to emphasise a more social experience. The question is, will users take to it? Goldman says early results are proving positive. Veoh’s unique visitors currently stand at 13.8m, up from 9m before the acquisition. Social viewing with Qlipso on Veoh.com averages 20 minutes per video, 16 minutes above industry average. Qlipso plans to develop its social platform further while seeking out more video content partners.

While the social video concept is a strong one, some may find the Qlipso interface with its avatars and chatroom to be a little overbearing, and of course it’s not much use if you don’t have any friends on Veoh to use it with. That said, with the forthcoming explosion of Internet-connected TVs on the way and platforms like Google TV, Project Canvas and Apple’s rumored next generation of Apple TV box likely to become the norm, we might all be watching video like this soon.

Read next: Palm Lab lets you edit photos like an electronic George Eastman.