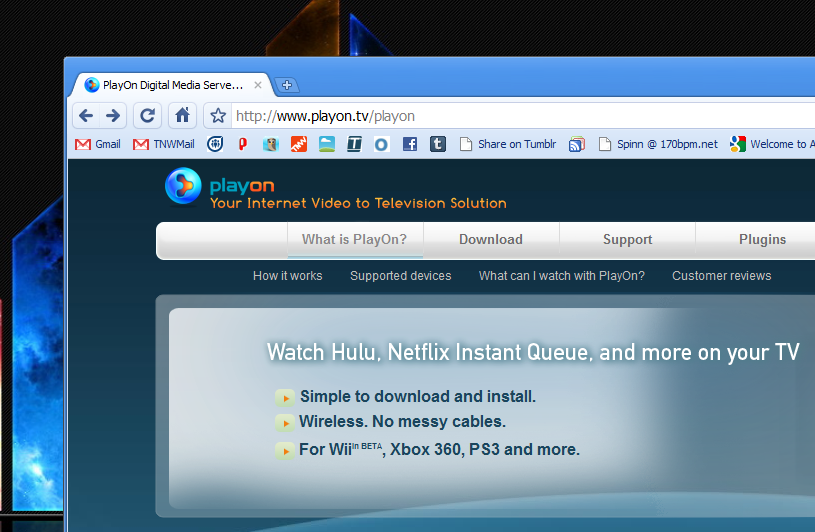 PlayOn, a program that takes content from streaming video sites like Hulu and displays them on game consoles such as the Xbox 360 or PS3, is coming to the iPhone, iPod touch and iPad.

PlayOn has experienced tremendous success by porting streaming video to devices previously unable to access streaming video sites.  PlayOn does this by installing a program on the device you want to watch videos on, as well as your desktop or laptop PC.

PlayOn can be used on a Mac by running it under Parallels (download here). PlayOn is also reported by many to run well over VMware and Boot Camp on Mac. Although the porting effort to Mac and/or Linux is fairly huge, the team at PlayOn does not plan to officially support either Mac or Linux any time soon.

For the iPhone, iPod touch and iPad, when the application is loaded and you  browse for videos, in essence your iDevice acts as a remote control for the PlayOn Software running on your PC.  After selecting a video to view, PlayOn software loads the video and makes it compatible for your iPhone, iPod touch and/or iPad.

Unfortunately there are some limitations with PlayOn, the first being that you must have a PC booted up and running the companion software. Second, PlayOn only works when both devices are connected to the same Wi-Fi network.  Finally, and most importantly to consumers, is the cost of PlayOn service.

PlayOn Lite is absolutely free for all users, offering access to “My Media” (all your local media files from your PC and home network), as well as the Pandora radio channel. PlayOn Premium costs $39.99 for the first year, and $19.99 per year thereafter.  By comparison, Hulu Plus runs $120 per year, which could push more to use PlayOn going forward.

PlayOn will be available for free in the App Store on July 15th for the iPhone and iPod touch.

Read next: How Old Spice showed us what a social media campaign is all about.