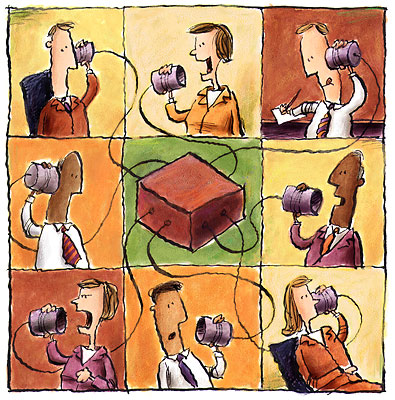 Threadsy, who we have covered before, has thrown open the beta doors today to let everyone and anyone into their platform. So what is this Threadsy? By pulling in your email, chat, Twitter, and Facebook it is a communications tool that is nearly unrivaled.

According to the company, the average 23-year-old has 6 accounts to check every single day. Threadsy wants to fix that by not only bringing together your most important communication tools into a single space, but working to “integrate the services to provide better organization of messages and deep context on the people you communicate with.”

In short Threadsy does not see itself as an aggregator, but an assimilator of conversations from the people you talk to and depend on the most. During their launch the company received praise for their product vision, but were warned that they were in a difficult space. Everyone from Google on down has struggled with communications at times. Given the challenge, how do they do?

Threadsy does execute well, with some caveats. You can imagine that Threadsy is something akin to the Seesmic web interface mixed with Gmail. Twitter messages is built shown your email, and chat occupies the lower section of the page, connecting to Facebook chat, Google chat, MySpace chat and so forth. The product feels fully thought and fleshed out.

Upon testing the product I have come to believe that it is most useful for people who do not receive more than a hundred emails a day, and follow a select few people on Twitter. If not, your “inbound” stream become polluted with a slurry of Twitter and email that is hard to pull apart. An email is nearly always more important than a tweet, which means to solve the problem it is best to remove Twitter to reduce total noise and confusion.

Threadsy has several other social and media features that add to the product, but they seem secondary to its core communications idea. Inside of Threadsy you can summon information on individuals, search for videos, and so forth. Nice, but not core.

Is It For You?

Returning to the noise problem, sadly once you pull Twitter from the service, you have a version of Facebook and Gmail that is too similar to regular Gmail functionality. However, Threadsy does have strong chat integration as we noted before. If you are a dedicated chatter, and heavily use Facebook and Gmail, Threadsy might be a good fit for you.

If like me you strictly use Google chat, Gmail, and Twitter, then Tweetdeck and Gmail web interface are a better mixture. It depends on how  you communicate. Threadsy has built a simple, and inclusive platform for what I would dub the “heavy casual” communicator and below. In short, they have built a mass market product with polish, something to be lauded.

While I am not their demographic, you can appreciate the design of Threadsy. It chimes quietly when new messages are loaded, the interface is snappy and readable. The company took their time building this.

Who Are They Competing With?

In no small way they are competing with a large list of companies. Given that Threadsy spans email and social feeds they are against Google, Seesmic, Twitter, Yahoo, Microsoft and so forth. Even so, it is hard to put a finger on who exactly is their competition. Email and social data are usually kept distinct, not mixed.

So should you use Threadsy? You should at least try it, it might be a good fit for your needs, especially if you find yourself constantly bouncing between websites to check data that is not always updating.

Read next: How A Hipster Breaks Up By Text Message