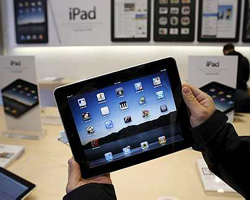 It’s official, the iPad has just been banned in Israel because of no not its magical appearance or aluminum body, because of its high WI-Fi signal output.

So if you are planning to go to Israel anytime soon either leave your iPad at home or join the dozen or so other iPads that have been confiscated by Israeli security/customs officers.

The main reason that Israel has banned the iPad is that it’s worried that it will interfere with the countries intricate communications network and with other devices on that network. Now this ban is not permanent, the Israeli version of the FCC is in the process of making sure that the new iPads comply with local transmitter standards, which more or less will not happen till the European versions of the device is released in May (we hope…).

“If you operate equipment in a frequency band which is different from the others that operate on that frequency band, then there will be interference. We don’t care where people buy their equipment. … But without regulation, you would have chaos.” – Nati Schubert, Senior Deputy Director of Israeli Communications Ministry.

Until the iPad is clear for use in Israel, they can be held at customs for a daily storage fee or you can take it upon yourself to ship your precious iPad back home or just pick it up from customs on your way out of Israel.

This ban will most likely not interfere with any sales of the iPad, with most speculating that it will be just as popular in Europe and the rest of the world as It has been in the United States in the past few weeks.

Israel is the first country to actually ban the iPad from being used within its borders. After the iPad being cleared by TSA within days of its release, it is surprising that they would take such measures just for frequency and WI-FI concerns.