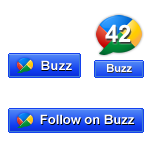 Google Buzz has taken a page out of Tweetmeme’s book and launched its own tools to make sharing posts and following users easier.

We’re one of a fortunate few who have been privy to testing the new tools and while nothing fancy, they do the job as expected and make sharing into Buzz and following users, easy as pie.

A number of sharing platforms, including ShareThis , Meebo, Shareholic, AddThis and AddtoAny have also incorporated the Google Buzz button into their sharing functionality. Google’s way of making sure you have absolutely no excuses to not be sharing into the service.

To add a buzz sharing button on your site go to buzz.google.com/stuff, configure your buttons with a couple clicks and copy a few lines of JavaScript. You can see an example of this button in the sidebar of this post. Expect a wordpress plugin from someone sooner or later.

To add a “follow me” on Google Buzz button you can find full instructions for that at buzz.google.com/stuff too. An example you can see here, purely for reference purposes but by all means click this button and follow The Next Web:

These are small steps in the development of Buzz but steps forward they are. If you ask me, there are a number of other features I’d like to have seen first but this is the new and improved social Google, surely its only a matter of time.

Read next: Social Network Tagged To Pay $650,000 In Settlement For Spam Dispute