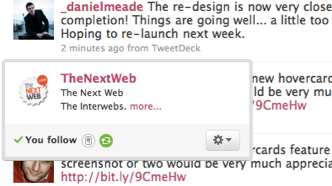 Quite simply, it’s a quicker way to view someone’s profile without being forced to visit their profile page. If you’re a heavy Twitter.com user it should make your experience that little bit easier, particularly when you’re curious to see who that person you’re following is mentioning or retweeting in a tweet.

The hovercards appear on any timeline and displays basic information about that person, but can also see more information with an expanded view (seen below) of the card. You can also follow, and send DMs to the person (if you follow them) direct from the hovercard itself.

Twitter is keen to point out that the feature is being rolled out in stages so you might not notice it immediately.

It’s interesting to see Twitter catch up with the likes of Seesmic Web and Friendfeed who have had the feature for some time. Clearly Twitter is beginning to take its primary interface a little more seriously. One step a time now…