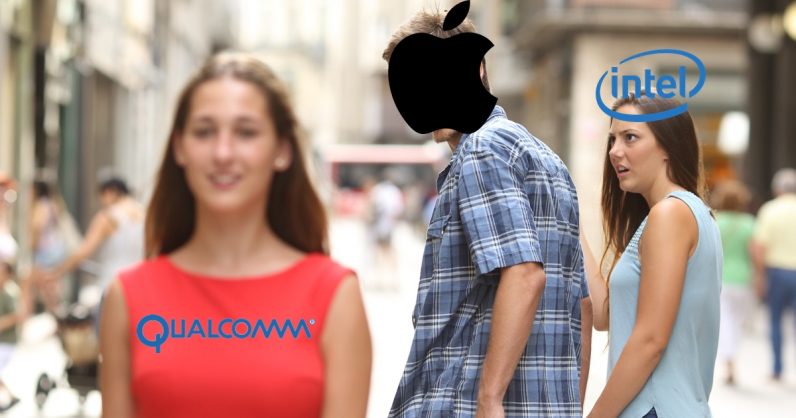 In a surprise move, Apple and Qualcomm finally agreed to end their long-term beef, and sign a six-year license agreement deal. Apple will also pay an undisclosed amount to the chipmaker as part of the settlement.

Hours after this announcement, Intel said that it’s exiting mobile 5G modem market, paving way for a Qualcomm–modem powered iPhone in the future:

Intel Corporation today announced its intention to exit the 5G smartphone modem business and complete an assessment of the opportunities for 4G and 5G modems in PCs, internet of things devices and other data-centric devices.

Before we discuss what this means for the future of these companies, let’s take a look at the timeline of this saga. In 2017, Apple filed an anti-trust lawsuit against Qualcomm for $1 billion. The iPhone-maker accused Qualcomm of charging a higher fee for using their patents if they chose a competitor’s product. In return, the chipmaker filed a countersuit claiming that Apple throttled its chips in the iPhone 7, and tried to ban Apple devices in multiple countries.

This fight forced Apple to use Intel modems for last year’s iPhone models – the iPhone Xs, the iPhone Xs Max, and the iPhone Xr. Earlier this year, the company said that Qualcomm refused to sell parts to the iPhone-maker.

This even forced Apple to test its upcoming 5G-enabled iPhone exclusively with Intel modems. However, some tests suggested that Intel modems are considerably slower than its Qualcomm counterparts. Last year, a report from The Information suggested that the Cupertino-based company is exploring making its own modems as well.

Now that the dust has settled, Apple can start testing a 5G-enabled iPhone with Qualcomm’s latest and faster modems. And we can expect it to show up next year with other iPhone models.

For Intel, it means saying goodbye to its 5G-mobile modem ambitions. It’ll still produce 4G modems for its clients; Nikkei notes that the chipmaker will also be the sole modem supplier for this year’s iPhones.

The biggest winner of this settlement is Qualcomm. It’s getting a payment from Apple, and a multi-year deal to supply chips for iPhone. This was reflected in the market as the company’s stocks jumped up 23 percent after the settlement news broke out.

Read next: Video: We grew weed in our office with this ~high~ tech smart garden