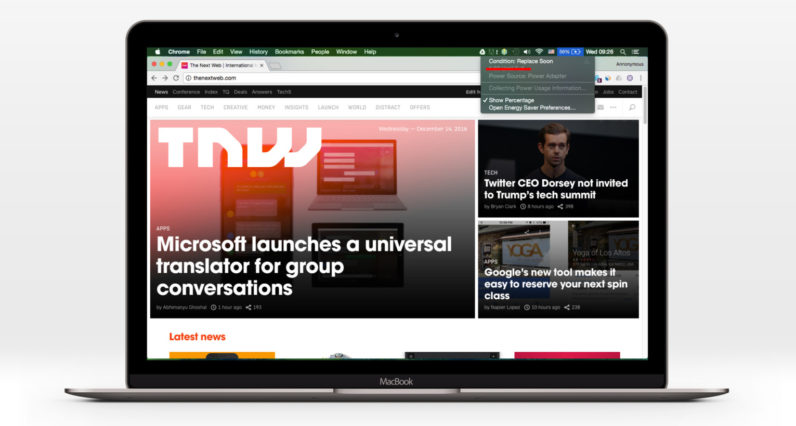 Last week, Apple came under fire from a mob of outraged customers crying out their brand new Touch Bar-equipped MacBook Pro laptops don’t seem to last nearly as long as the 10 hours the company promises on its website.

In an effort to curb criticism, the Big A has made an executive decision to ‘fix’ the issue by axing the ‘time remaining’ estimate that shows up in the status bar once you click the battery icon.

The change comes with the latest reiteration of macOS Sierra (10.12.2) which started rolling out yesterday.

It remains unclear whether the ‘time remaining’ indicator will reappear once Apple’s engineering team has resolved all complications with the battery – but I certainly hope so.

And case the problems continue to persist, well…

If the battery life of the revolutionary new MacBook Pro with Touch Bar is a concern, buy a second fucking MacBook Pro. pic.twitter.com/NXHEHiR6Dg

Apple has been dealing with a string of product-related issues recently.

Following a litany of complaints, last month Cupertino finally acknowledged some of its iPhone 6 models have been affected by screen glitches, more commonly known as ‘Touch Disease.’

If this wasn’t enough, a few days later the tech giant also announced it’ll be replacing a small batch of iPhone 6 handsets with faulty batteries free of charge – a problem that subsequently turned out to be much more widespread than initially thought.

The revamped MacBook Pro had an outstanding opening week, raking in more sales in the laptop market during its first five days of retail than competitors did in ten months.

But a mishap like this could leave a serious dent in sales, if the company fails to adequately tackle the complications. Better act quick, Apple.

Read next: Google Drive now makes it easy to switch from iOS to Android