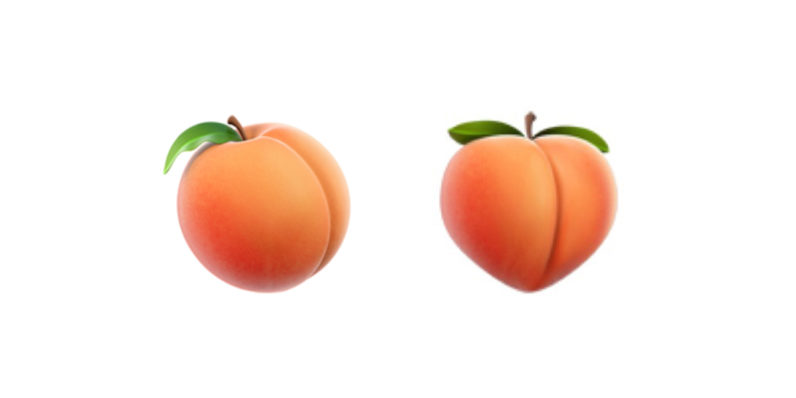 Emoji enrich our language by giving us fun, colorful alternatives to conveying words or emotions. But next to spicing up a formal conversation, they can also be used in more intimate situations.

When it comes down to it, there are only two emoji that have genuinely sexual subtext — 🍆 and 🍑. For years they’ve looked the same, but Apple has recently redesigned its emojis to give them a new, more realistic look.

This is what the peach emoji looks like if you run the latest stable software, iOS 10.1.1, on your phone:

As you can see it’s a perfectly butt-shaped version of the fruit, which has adorned many sexts since it was introduced.

This, however, is the new design that made its way into the first developer beta of 10.2:

In its quest for more realistic emoji, it took out all sexiness from the peach and turned into something that mostly resembles an orange bouncy ball.

RIP to the old peach emoji. Thank you for getting me A LOT of sex. You will be missed when I describe my butt to potential suitors xoxo pic.twitter.com/rTJ5Vc7djl

But even though iPhone users across the globe got angry for seeing its favorite fruit being removed from their phones, Apple didn’t react to the discontent — until today.

In today’s release of the third 10.2 developer beta, the peach got a positive makeover:

Yes, that’s right — it finally looks like a butt again. It’s a bit more shiny than before, but that’s not necessarily a bad thing.

This means two things — first, Apple actually listens to its users sometimes. But more importantly, the company is acknowledging that the peach is not only used to talk about groceries, but also fulfills a more rump-shaped role.

Thanks Apple, for showing your sexy side.