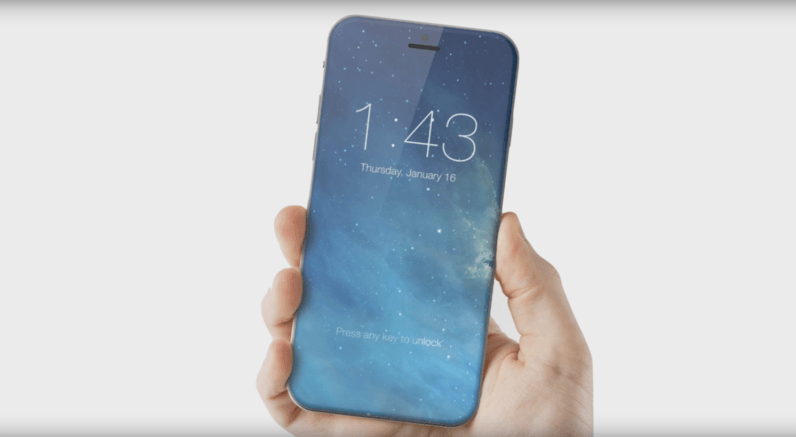 According to Barclays Research analysts Blayne Curtis, Christopher Hemmelgarn, Thomas O’Malley and Jerry Zhang, Apple’s next-generation iPhone, which is expected to be called the iPhone 8, could ship with a larger screen and a curved, bezel-less design.

Citing sources within Apple’s supply chain, the analysts revealed that borderless design will enable the firm to pack a 5-inch display in the iPhone 8 and a 5.8-inch panel in the iPhone 8 Plus, while maintaining the same size and form factor as the 4.7-inch iPhone 7 and 5.5-inch iPhone 7 Plus.

“iPhone 8 design didn’t sound 100% locked down but we believe the move is to a bezel-less design with screen sizes getting larger and curved edges in the original envelope. The IP8 moves to 5″ (from 4.7″) and the Plus moves to 5.8″ (from 5.5″),” writes the analysts in a memo obtained by Business Insider.

It’s also believed that the iPhone 8 Plus will be Apple’s first smartphone to feature an organic light-emitting diode (OLED) screen that will spill over the sides, creating an edge-to-edge touch surface that’s similar to the one on board Samsung’s Galaxy S6 edge and Galaxy S7 edge.

“By using a plastic OLED screen, the screen can bend at the edges to allow a curved bezel-less edge,” the analysts wrote. They then went on to add that they expect most of the panels to be produced by Samsung and LG as Foxconn-owned Sharp is still working to get its factories up and running.

This news comes a few months after KGI Securities analyst Ming-Chi Kuo, who’s arguably one of the most accurate voices on Apple’s future products, predicted that the Cupertino company will launch a 5.8-inch iPhone with a curved OLED display and glass casing in 2017.

It’s important to bear in mind that the information included in this report is far from confirmed, so it should be taken with a considerable pinch of salt. That said, Apple’s rumored to be planning a major redesign for its 10th anniversary edition of the iPhone, so we wouldn’t rule out the possibility of it packing a curved screen.

Read next: 20 promising startups looking to SCALE in New York next week