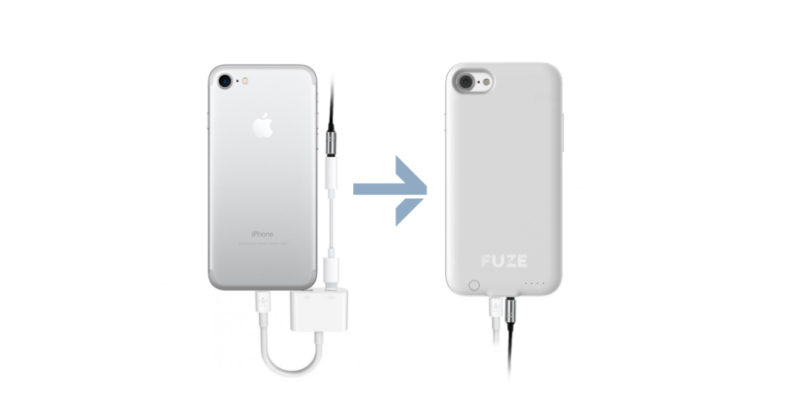 If you think Apple killed the headphone jack on the iPhone 7 a little prematurely, you’re not the only one – and now there’s a company that wants to bring it back.

Today, Fuze launched an intriguing Indiegogo campaign that promises to bring the audio port back to the iPhone 7.

To achieve this, the company is taking Apple’s Lightning to 3.5mm adapter and building it straight into a case, where you can plug your headphones with “no dongles, no adapters, no problems.”

In addition to the audio port, the Fuze Case will also serve as a battery pack as it adds 2,400mAh of extra battery life to the iPhone 7 and 3,600mAh to the 7 Plus.

Fuze restores 3.5mm audio jack for iPhone 7 and 7 Plus. It delivers a doubled battery life as well as scratch and shock protection, all while maintaining the iPhone’s compact profile. We need your help to bring back the jack. When you purchase Fuze, you purchase the freedom of choice.

This is how the Fuze Case will look:

It will be available in five different colors including white, black, gold, rose gold and blue.

The case is currently available for $49 to ‘super early bird’ backers, but will increase to $59 once more people have chipped in and will eventually sell for $69 in retail. The company expects to start shipping the accessory in December later this year.

Head to the Indiegogo campaign for more details about the Fuze Case.

Fuze Cases: Bringing Back the Audio Jack on IndieGogo

Read next: How I fixed my Wi-Fi by ditching shitty consumer hardware