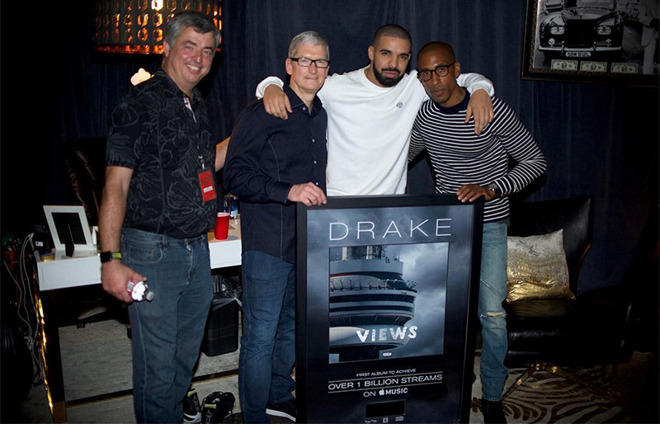 Canadian rapper Drake has revealed that his fourth studio album Views is the first to surpass an eye-watering one billion streams on Apple Music.

To celebrate the achievement, Apple presented the artist with a stunning plaque, complete with a signed thank-you note from CEO Tim Cook.

In typical Drake fashion, the artist took to his Instagram profile to share the accomplishment with his 28.5m followers in the form of two pictures:

🍏🍎 Thank you to everyone. OVO Sound to the 🌎 @applemusic

Views debuted on Apple Music back in April as a five-day exclusive. During this time, it accumulated more than 250 million streams and one million sales on iTunes.

This isn’t the first time that Drake and Apple have collaborated, though. The artist was actually on stage when the company revealed its music streaming platform.

Drake has now taken the partnership one step further as he has released a 23-minute short film to accompany the album on Apple Music.

The explosive visual companion to #VIEWS. @drake’s Please Forgive Me.
Only on #AppleMusic:https://t.co/86DnYZFruv pic.twitter.com/ANlLgr2imC

Unfortunately, it looks like it available for a short period of time, so if you want to watch it, you better act fast.