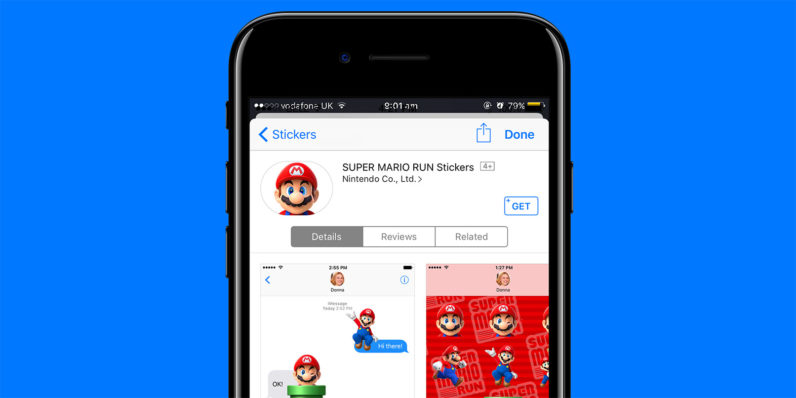 iOS 10 is scheduled to start rolling out later today, but the beta has been available for some time. Ahead of the OS’ official rollout, Apple has opened the iMessage App Store, where you can get apps, stickers and games to enhance your texting experience.

The company showed off a few of these apps, like Square Cash, at its WWDC developer conference back in June, and demonstrated how you could create sticker packs for iMessage without having to code.

We built Square Cash right into iMessage for iOS 10! pic.twitter.com/1pUaWCdpVz

There’s now a Super Mario Run Sticker pack, as well as several $2 Disney sticker packs including a Star Wars set. In addition to using them as reactions in your messages, you can also peel and add them to conversation bubbles and photos.

You can also find the updated Citymapper app, which lets you share your location in iMessage with a tap.

You can now try these and other apps by grabbing them from the iMessage App Store, which you can access by tapping the Apps button in iMessage and selecting ‘Store’.

Naturally, this app ecosystem is likely to grow as more people begin to search for and install iMessage apps. If it takes off, it should spell big bucks for Apple as the company will be able to profit from sticker sales. For reference, messaging app Line made more $270 million from sticker sales alone in 2015. Plus, Apple said it will allow messaging apps to offer subscription plans to customers, just like some native apps.

What are your favorite iMessage apps so far, and what are you looking forward to? Let us know in the comments.