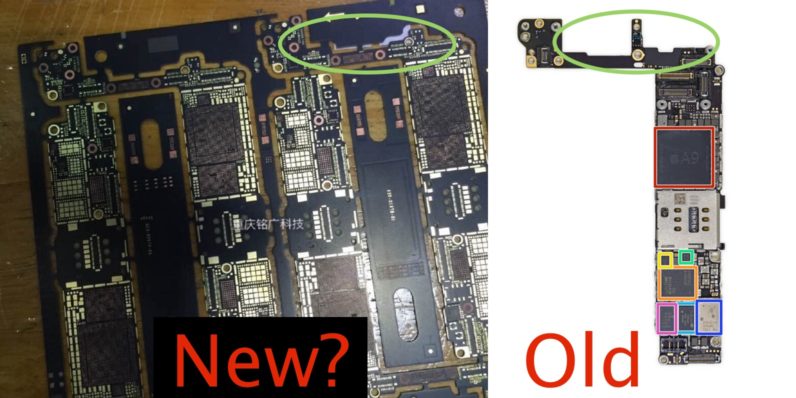 The logic board for the incoming iPhone 7 may have been spotted in spy photos from Apple’s supply chain, and suggests there are some significant design changes in store.

First spotted by TechTastic, the images show a macro form with two logic boards cut from it. The L-shaped board is nothing new, but some of the subtle changes hint that previous rumors are correct.

When compared to the logic board from the iPhone 6S, this model further suggests rumors of a more squat iPhone 7 are accurate. Where the board would settle into the center-top of the iPhone, Apple seems to have eliminated a second screw.

And it also points to a larger camera lens — or perhaps two. On the iPhone 6S, the screw was structural. This time around, it looks like Apple slid the screw down to the main branch — but why would it want more room?

The only logical (pun!) conclusion I come to is that the camera needs extra space, possibly because this board is meant for an iPhone that has two lenses.

Elsewhere, it seems Apple has rejiggered some things, which also lends itself to a smaller footprint for the overall design. Still, we can’t point to the iPhone 7 having any major new features with this image.

But expect upgrades everywhere. If history tells us anything, we’ll see an A10 SoC, and perhaps even revamped NFC, sensors and modem.

The iPhone 7 is expected to launch September 12, and may arrive in-store on September 16.

Read next: NBC is bringing its top shows to Snapchat (kinda)