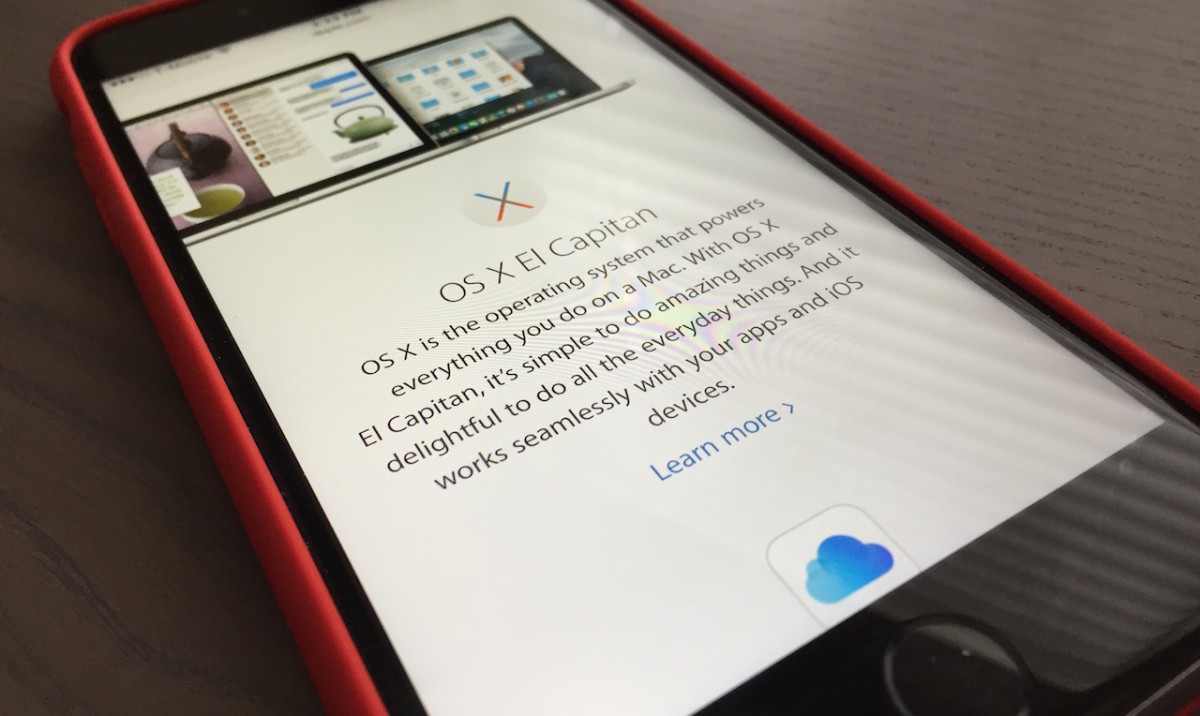 When OS X El Capitan launched, it proved the tightest integration with iOS Apple’s desktop platform has ever had. While iOS still leads the way, El Cap has made it better.

Apple’s Notes app is quite good for iOS. It opens itself up to the sheet, which lets you cobble together links and media from various sources.

On OS X, Notes is a much better taskmaster, due mainly to the desktop environment. Hacking out a lengthy to-do list is much easier and better with a physical keyboard, and there’s no arguing selecting large portions of data is easier with an actual trackpad or mouse.

Notes on El Cap also lets you toss the same links and media as its iOS counterpart; the only thing missing is the sketch feature, but that’s too niche for me to worry about.

After you create a list via the desktop, it syncs to your mobile device. You can obviously edit as needed on mobile, but desktop creation is just plain faster and better. Dragging and dropping is far more intuitive than a share sheet — and faster, too.

The Photos app first launched on OS X Yosemite, but quickly made its way to iOS. As a cross-platform service, it syncs your photos across all devices.

Editing photos on the desktop is still much better than via an iPad or iPhone, and extensions for Photos are starting to roll out. After an edit, those pictures end up in your Photos library, synced across all of your devices.

While iOS has come a long way with regard to photo editing, it’s something still best suited for the desktop. If you never want to leave the Photos app, extensions can give you a more well-rounded experience.

We’ve all been there: sitting in the office, working on a few things before needing to dash away for a meeting.

While Apple Maps has a sordid history of just plain sucking, it’s now quite powerful and useful.

Finding destinations or routes to take is something I still prefer to do on the desktop when possible. Maps’ impressive new transit info is amazing for city dwellers, but handoff helps transition your desktop searches to mobile.

Once a destination or route is finalized, you can quickly flick it over to your iPhone and be on your way. As you’re walking out, your Maps route syncs to your phone, and one click on your mobile device gets you headed down the right path. It’s very handy when you’re pressed for time and need to make sure you catch public transportation.

I’m bullish on El Cap, but I’m also mobile-centric. I use El Cap to get by day-to-day, but iOS (and mobile in general) will always going to be more central to my life.

I spend my entire working day using Notes, and I’d much rather create on desktop ahead of mobile. It’s still good on iOS, but Notes is much better on OS X.

Maps has a lot of ground to cover before many of us will give it a shot, but El Cap actually encouraged me to give it another try. It’s still not quite as good as Google Maps for driving directions, but Apple Maps is now robust enough to make me want to use it.

The ability to feed desktop searches and directions to my phone and watch with a single click is phenomenal, and happens really quickly. Other map services also do the same, but Apple’s tight integration makes it seamless.

Photos is just starting to get extensions for the desktop, but now that Metal is available for OS X — look out. Pixelmator’s extension isn’t a full-fledged editing client within Photos, but it’s powerful, and adds features Photos was lacking. Other developers should take note and follow suit.

For the first time, I’m actually editing 90 percent or more of my photos in the Photos app. What I’m not able to do could easily be solved with an extension, too. As they start rolling in, I expect extensions to make significant headway for desktop editing. It won’t replace Photohop — then again, we don’t all need Photoshop.

While the two operating systems are meant for different thing, they work really well together. It hasn’t always been that way, but it’s something I’m enjoying quite a bit.

Read next: Anki's new robot car racing game totally blew me away by bridging the digital and real world