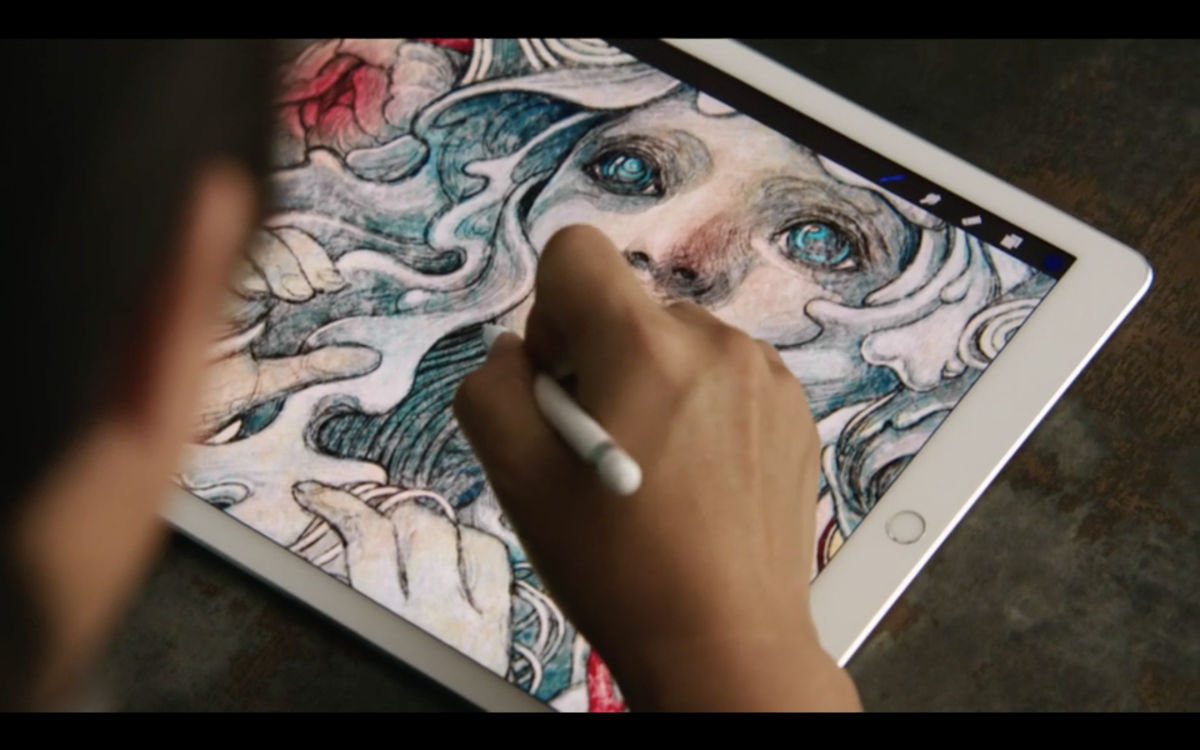 It’s real! At today’s event, Apple unveiled the iPad Pro, a 12.9-inch tablet designed for those who want more screen real estate on the go.

On the outside, there isn’t too much new other than the larger screen, while on the software side, you’ll be using iOS 9.

The exciting parts are the internals and accessories.

The display contains 5.6 million pixels, at a 2732 x 2048 resolution (which is, of course, Retina-class). The panel also includes a variable refresh rate – a first for the iPad. Thi allows it to save energy by only refreshing the panel as often as necessary for the on-screen content.

The display more capacitive sensors for more accurate sensitivity to your finger inputs. That said, there’s no pressure sensitivity, as seen in the 2015 MacBook‘s new trackpad or today’s new iPhone 6s and 6s Plus.

When listening to music or gaming, the iPad Pro will playback sound using four different speakers, from which it will select the optimal configuration depending on whether the tablet is in landscape or portrait mode. Apple says these speakers have been optimized for high dynamic range (the difference between loud and soft sounds), and frequency response.

In terms of performance, it’s powered by a new third-gen A9x chip; Apple is calling it desktop class, at 1.8x faster than its predecessor. In fact, the company boasts it’s faster than 80 percent of the portable computers shipped in the last quarter (with better graphics than 90 % of them).

Despite all that power, Apple is claiming the iPad Pro will still last for ten hours of average use.

The company is also introducing a new keyboard called the Smart Keyboard, which doubles as a kickstand. The keys use Apple’s new dome switches – similar to those in the new MacBook – and it folds onto the tablet as with Microsoft’s Surface Type Cover. iPad users already have plenty of keyboards to choose from though.

More interestingly – and potentially to the late Steve Jobs’ dismay – Apple is introducing… a stylus.

Or, as they call it, the Apple Pencil.

There’s a lot of cool technology packed in. Aside from the expected pressure detection, it includes two sensors to know which way it’s tilted for advanced shading techniques. You could paint using the Pencil’s side, for example, to shade with a wider, lighter spread. Draw using the tip, and you’ll have a darker, thinner line.

Apple says it’s so precise it can touch a single pixel, in addition to very low latency that is supposed to feel like real pencil on paper.

The Pencil will last “hours” on a charge, but can recharge with a Lightning Connector, which plugs into the iPad Pro’s own port. Neither accessory will be included with the tablet.

But wait, there’s more: Apple brought Microsoft, of all companies, on stage to demo how Office can work with the iPad Pro. But then again, who better to demo a stylus?

The company showed off using Word and Excel at the same time thanks to iOS 9’s new split-screen view, as well as handwriting using the Pencil. You can even draw shapes in PowerPoint and have them automatically become graphic objects.

Apple also brought out Adobe to show off retouching using the stylus, and also demoed an anatomy app that rendered different layers of the human body in real time.

All the on-stage presentations were examples of Apple showing off how the iPad Pro could replace some desktop functionality; the iPad Pro at creative professionals and the enterprise.

That angle isn’t surprising; it’s the first time Apple’s introduced a new input method for the iPad, so it’ll be interesting to follow how iPad Pro-specific apps develop over time. The additional computing power and precision of stylus interaction should help developers create new experiences that have previously been limited to desktop operating systems with mice or styluses.

As for the accessories, the Smart Keyboard will cost $169, while the Apple Pencil will burn an additional $99 from your wallet.

That’s an expensive upsell, particularly given Microsoft is often chastised for not including its keyboard cover and stylus with all of its Surface tablets. Still the iPad Pro will likely work fine as a standalone tablet given the plethora of existing iPad apps, whereas those accessories are seen as more essential on the Surface, given its desktop OS.

For more on today’s news, check out our recap of everything Apple announced, or revisit the events play-by-play with our liveblog.

Read next: Microsoft showed up to demo Apple's new iPad