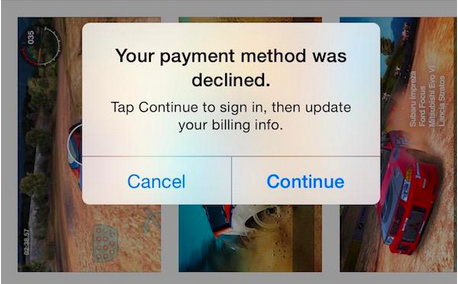 Greece has a lot of problems right now as a result of the debt crisis, but one that you might not have immediately anticipated is that online services that require credit or debit payments to a foreign company are broken.

And now apples App Store is declining Greek credit cards. How is Alexis going to download the latest candy crush ?

As BuzzFeed reports, the Greek government’s imposition of capital controls – which restrict citizens’ ability to take money out of the country – following its failure to make debt repayment, also mean they can’t buy a €0.99 song from iTunes or grab new apps.

Of course, it’s not the biggest issue faced by the country, but it is another source of frustration for put-upon Greeks, and a yet another significant headache for developers and startups there who are already struggling.

PayPal, which is central to a lot of online transactions, is also unusable for most people. Essentially, any feature of an online service that requires a credit card is broken for Greeks.

Apple has not publicly commented on the issue. PayPal said in a statement:

We are carefully monitoring the situation in Greece and progress of negotiations between the Greek government and its lenders.

Due to the recent decisions of the Greek authorities on capital controls, funding of PayPal wallet from Greek bank accounts, as well as cross-border transactions funded by any cards or bank accounts are currently not available.

Understandably, Greeks are taking to social media to bemoan this side effect of the government’s measures. But whatever the result of this weekend’s referendum on whether Greece should remain in the European Union, the issues are likely to continue for some time.

If you’re in Greece, let us know in the comments how the capital controls are affecting your life online.

Read next: Confused by Apple Music? Read this