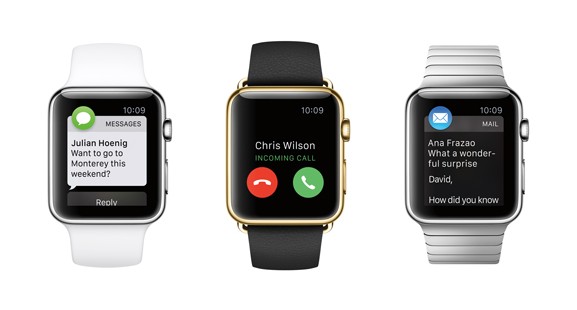 Apple promised 18 hours of battery life with “typical usage” from the Apple Watch during yesterday’s launch event, but dig deeper on its site and you’ll find a breakdown of how the new device will fare in a variety of scenarios.

In testing for different types of user, Apple says it used a preproduction 38mm Apple Watch paired with an iPhone, both running preproduction software. If you buy the 42mm model, you can expect longer battery life but the company hasn’t made test figures for it available.

If you’re hoping to use your Apple Watch throughout the working day, Apple’s tests predict you’ll get 18 hours of battery life. It breaks that down to 90 time checks (5 per hour), 90 notifications, 45 minutes of app use, and a 30-minute workout with music playback via Bluetooth. If you’re someone who gets a lot of notifications, you’ll need to charge it up a lot more frequently.

This one’s slightly odd but if you use your Apple Watch to listen to music via Bluetooth, instead of just plugging your headphones into your iPhone, you’ll get up to six and a half hours of playback.

If you see the Apple Watch predominantly as an exercise device, Apple says it’ll accompany you for up to seven hours with a workout session active and the heart rate sensor switched on.

Should you decide to shun all of the Apple Watch’s features besides its ability to tell the time and stick to five checks per hour – each lasting four seconds – you should be able to get up to 48 hours worth of battery life. You could also save a lot of money and buy a Swatch.

This is one we’ll particularly have to test when we get our hands on an Apple Watch for keeps. The company says if the device’s battery gets too low – it doesn’t define what level that might be – it will switch into Power Reserve mode. When it does, you should be able to check the time for up to 72 hours, provided you stick to four checks of four seconds each per hour.

As with battery usage, charging time is subject to environmental variation. Apple claims you’ll need to put aside 1.5 hours to charge the device from empty to 80 percent capacity and 2.5 hours to go from empty to 100 percent.

Read next: The Apple Watch: Everything You Need to Know

Read next: Storygami is building a tool to add context to Web video