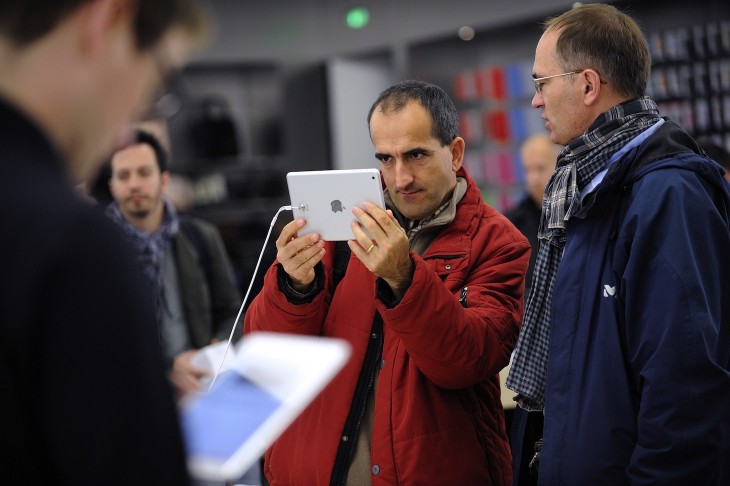 Apple has been testing iPhones with screen sizes of between 4.8 inches and 6 inches, according to The Wall Street Journal. Of course, the company is bound to have tested all manner of phone sizes, so the revelation isn’t particularly surprising, but it’s worth noting even if only for the mental exercise of trying to imagine making a call with a 6-inch iPhone.

If you’re in the market for a bigger iPhone, don’t let the Journal get your hopes up yet, though. The report suggested that Apple isn’t planning on releasing any of the larger versions it has been testing at its media event on September 10th. Signs are currently pointing toward Apple releasing two models of its smartphone line: the iPhone 5S and a cheaper iPhone 5C. The iPhone 5S is expected to come in black, white and gold colors, while the iPhone 5C is rumored to come in several bright colors.

At first mention, a 6-inch iPhone sounds simply monstrous. Apple’s competitors have moved toward larger form factors, but it’s not like the company to give in to that kind of pressure. Assuming for a minute that Apple kept the same 16:9 ratio it introduced with the iPhone 5, a 6-inch diagonal would result in a screen height of 5.2 inches and width of 2.9 inches. The iPhone 5 display is 3.5 inches tall and 2 inches wide. The different in area between the two devices would be 125 percent.

The market certainly exists for oversized phones. Samsung has established itself as the king of the awkwardly-named “phablet” market with its Galaxy Note devices. By way of comparison, its latest, the Galaxy Note 3, sizes up at 5.7 inches. However, that alone isn’t reason enough for Apple to create a massive iPhone.

Here’s one possible explanation for a 6-inch iPhone. A phone that big would already be well into tablet territory, so what if Apple intentionally blurred the lines between all of its iOS products and gathered them into one family. Users would then simply have to choose their preferred size and connectivity options. It would pose some interesting engineering problems, but Apple is already building iOS devices as both Wi-Fi and cellular models, so it’s not much of a stretch.

Telephony itself is getting blurred. We can make FaceTime and Skype calls on an iPad and use iMessage or any other messaging app, and we can even do so over a cellular network. Viewed from that perspective, the inability of an iPad to make calls and send traditional text messages seems like an arbitrary limitation.

In a sense, the move would actually resemble what Apple has done with its Mac lineups. All Mac computers are united around a common operating system, but they’re divided up based on customer needs. Users can choose the machine that best fits their specific preferences on mobility, power, price and upgradeability. Taking things one step further, iOS and OS X could even be viewed on a single computing continuum that scales up, or down, based on need.

Accessories could also make tablet-sized iPhones more of a possibility. Samsung, for instance, is trying to do just that with its Galaxy Gear smartwatch. At launch, the Galaxy Gear will support the Galaxy Note 3 and the Galaxy Note 10.1 tablet, two of Samsung’s biggest mobile devices. Samsung does plan to add support for its S-class Galaxy phones, but the Gear has a better value proposition when paired with larger devices, which tend to be more unwieldy.

While I’m not convinced that the current generation of smartwatches is worth the cost, wearable devices would at least eliminate the awkwardness of holding a tablet up to your face to talk. If we spend all day controlling our smartphones/tablets with watches, earpieces or headsets, then the size of the screen can be more flexible. Wearables would make ergonomics and weight less of an issue.

A 6-inch iPhone might sound weird now, but it’s not hard to imagine a future where users have a flexible collection of devices tailored to their unique communication and computing needs. With all the tech that’s built into our music players, bracelets, watches, glasses, smartphones, tablets, laptops, desktops and cars, we’re already most of the way there.

Read next: Make better use of your site's favicon with this JS library. Perfect for notifications and badges.