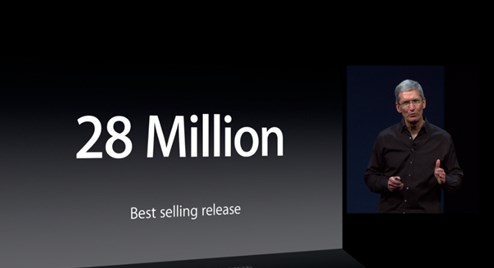 At WWDC 2013 today, Apple CEO Time Cook announced it has sold 28 million Mountain Lion copies to date. Furthermore, the company revealed 35 percent of Mac users are on the latest version of the operating system.

Apple says there are now 72 million Macs, growing at a rate of 100 percent over the last 5 years. Cook compared that to the PC market, which was up only 18 percent in the last five years, also making a point to note that Windows 8 has only been able to grab a few percentage points.

Last year, Apple announced Mountain Lion downloads hit 3 million in the first four days of availability, which the company claimed made it the most successful OS X release in Apple’s history. Mountain Lion’s successor is naturally expected to surpass both records.

Mountain Lion was a $19.99 download from the Mac App Store. Apple didn’t receive x million payments of $19.99, however, as one payment allows a customer to download the OS to multiple machines tied to the same Mac App Store account. Furthermore, some users took advantage of a program that let Macs purchased just before the operating system update to grab it for free.