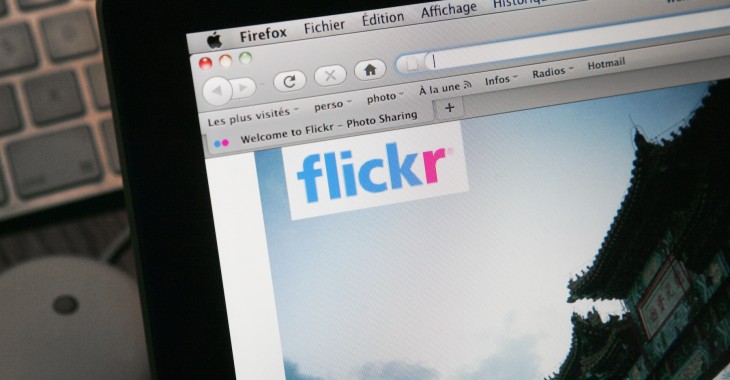 Confirming Marissa Mayer’s commitment to a mobile-first strategy, Yahoo has announced the second major overhaul of one of its apps in as many days (following its Yahoo Mail refresh) – a new version of its Flickr iOS app, which has been stripped down, completely redesigned and relaunched in a bid to get people back using the photo-sharing service.

The app has been given a fresh, modern look that allows users to immediately log in using their existing Yahoo account but also using their Facebook credentials. There’s also an option to use your Google account, but this is hidden from the front page.

Once you are logged in, the Flickr app provides tooltips that help walk you through its features, showing you were options are located and how to use gestures to favorite a photo.

The app takes cues from other image-sharing apps – particularly Instagram — but it also borrows heavily from its Android app. Yahoo updated the Android app back in August, overhauling its UI to add a new tabbar, new ways to explore, the editing of metadata and whole host of other new features.

It’s the same for the iPhone app, which groups your contacts’ most recent updates on the main screen, allowing you to favorite them with a simple double-tap. Similar to Instagram, Flickr offers a tab that groups photos based on Interestingness or by location, and like Twitter, enables users to add filters to photos (which are also provided by Aviary).

There are 16 unique camera filters, providing a quick and simple way to snap, filter and share images very quickly using Flickr’s own tools, another attempt to lure people away from the 100 million user strong Instagram. When it comes to sharing, Flickr provides support for Facebook, Twitter, Tumblr and email.

Yahoo has included full Groups capabilities, finally bringing more control over features that until today were only available via the Flickr.com website.

Profiles have been given an overhaul too, with Sets, Groups, Favourites, Photos Of and Contacts options added to the photostream pane for easy access.

Will the new app lure people back to Flickr? The service remains a favorite place to store and share photos for professional and amateur photographer alike, but the new update may help bring casual sharers also. With easy sign-up options, Flickr’s app is well-placed to onboard users quickly, giving them another photo-sharing app to add to their arsenal.

Oddly, there’s still no iPad app – but we hear one is coming.

Read next: Facebook lets you see the 20 biggest moments in your life this year and reveals the top trends of 2012