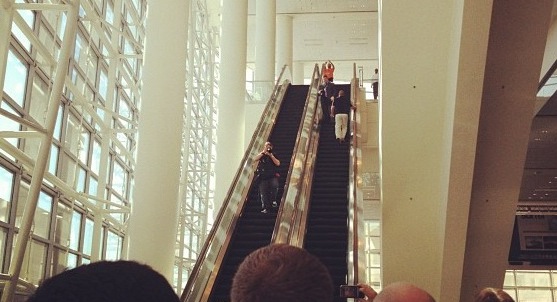 Apple’s developer evangelist Michael Jurewitz has left Apple for a job at software firm Black Pixel, he has announced on his personal blog. He will be joining the firm as a partner in a directorial position.

As a well-respected and outspoken member of Apple’s developer liaison team, Jury has been a major focal point of Apple’s efforts to maintain relationships with the huge and vibrant developer community that sustains its App Stores. As a vocal presence on Twitter “Jury” has acted as a go-between the immense developer community and an Apple not exactly known for its transparency.

As a proponent of keeping bug reporting and squashing efforts focused, Jury’s rallying cry on Twitter became “have you filed a Radar?” This was succinctly summed up by developer Steve Streza in this graphic:

He is also a fan of photography, as can be seen in the header image for this article, which shows Jurewitz running down the up elevator at Apple’s recent World Wide Developer’s Conference with camera in hand in order to get a shot of the crowd of waiting developers below.

Jurewitz explains that he took great pleasure in his time at Apple:

For the past seven years I have worked in Apple’s Worldwide Developer Relations team helping OS X and iOS developers build the best apps in the world. Working closely with many of you in the developer community has been the highlight of my career. I have loved every minute of helping to answer your technical questions, providing technical, business, or design guidance, planning and visiting with so many of you at WWDC, traveling around the world to share the Tech Talks with you, fielding bug reports, or just being someone at Apple for you to talk to. You have challenged me, helped me grow, amazed me, and inspired me. The iOS and OS X developer community is one of the best in the world. I am very lucky to have had the opportunity to work with all of you and I am excited to join your ranks.

Leaving Apple is also bittersweet. I have wanted to work at Apple from the first moment I fired up the Apple IIGS in the study of my childhood home. Throughout my years in school I was the ardent Apple supporter and evangelist among my friends. Through the dark times in the 90’s, I worried that I might not get the opportunity to work at the one place I knew saw technology differently. And in the summer of 2005 I stepped onto Infinite Loop for what was the happiest day of my life to that point.

To my colleagues at Apple, I hope you share my pride in all that we have built. Apple is the greatest company in the world because of all of you. The culture at Apple owes itself to the people and the values each of you have helped solidify — The wisdom to care about what really matters, the courage to always forge ahead, and the patience to do things right. Your work has touched countless lives and changed how the world works. I look forward to whatever comes next. You are all truly remarkable.

Black Pixel head Daniel Pasco welcomes Jurewitz to the firm in a blog post. “Michael and I have spent an unbelievable amount of time talking over the years, both in the abstract, and later, in more concrete exchanges of ideas, goals, and viewpoints,” says Pasco. “Michael, to me represents some of the very best things I have come to know about Apple’s culture: He is hard working, practical, concerned about the big picture as well as sweating the details, and he is driven to make whatever he is involved in the best that it can possibly be.”

Jurewitz will be joining the company to work directly on client and internal projects and act as a guide for engineering and design best practices.

“As an Apple Evangelist, Michael has long been a well-known person in the development community, says Pasco. “I am unbelievably happy that when he decided to join the community, he chose to join Black Pixel.”

Black Pixel is a well-respected development firm that has taken on the reins of popular Mac software like Versions and Kaleidoscope, as well as the revered RSS reader NetNewsWire.

“I look forward to the challenges ahead and to my new place in the developer community. Thank you for everything. I’m sure the best is yet to come for all of us,” says Jurewitz, closing out his farewell by reiterating Steve Jobs’ famous advice: “Stay hungry. Stay foolish.”

Read next: Pingdom: US is the world's largest Website host, 5x more than second place Germany