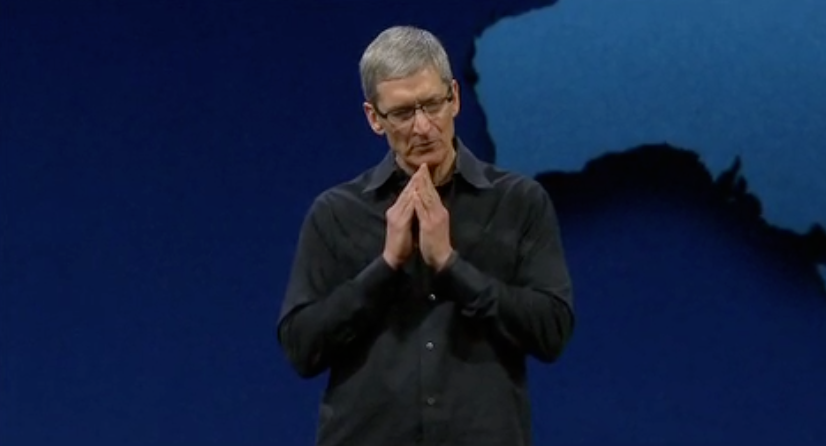 “For Apple and, I suspect, many of you, our goal has always been to do great work. And, in doing so, make a difference in other people’s lives.”

That was an intense and impassioned Tim Cook, who took the stage on Monday at Apple’s WWDC 2012 conference. This was a different man than the past COO, who took the stage to hammer out numbers and statistics demonstrating Apple’s dominance and the health of the company.

Instead, we got an impassioned Cook that spoke with intensity about the affect that developers were having on people’s lives. The conference kicked off with a lighthearted video that snuck in some digs at Google, a theme that would continue throughout the conference, before Cook began his presentation.

At first, it looked like the standard pitch. Cook trotted out numbers related to the App Store and its success for developers monetarily. There was a $5B check displayed, the amount that Apple had paid out so far to those publishing apps on the App Store. Statistics were rolled out showing the dominance of the App Store and its comparative lack of software version fragmentation, something Android famously suffers from.

“What we do together is more important than any set of numbers could ever reflect.” With that, Cook introduced a video which highlighted various ways that iPhone and iPad apps were helping those with disabilities and speech issues overcome them. This was smart on several levels, as Apple’s accessibility support for those with sensory impairments is notoriously good when compared to other mobile platforms. One of the developers in the video actually said that he “never considered developing on another platform,” when he began programming his app that uses GPS to help the blind navigate.

The video was clearly promotional in nature, but the target of the promotion was the interesting bit, as it wasn’t the public, but the developers in the keynote audience. With the video, and a passionate presentation from Cook, Apple was appealing to the people that make apps for its platform, telling them that what they do is about more than making money, it’s about ‘changing the world’ and ‘helping people’.

There is no doubt a heavy bit of savvy positioning going on here, as there always is in Apple’s keynote presentations. But Cook’s passion reminded me quite a bit of another Apple presentation at the WWDC held in 1997, hosted by founder Steve Jobs.

The presentation, mostly a Q&A session really, was hosted by a Jobs newly installed as Apple’s interim CEO in the place of Gil Amelio. The tone of the event was an interesting one. Jobs had the job of convincing the developers in the Apple ecosystem that this new regime would bring a return to form and that the software technologies of NeXT, an essentially failed hardware company, were the key to this. The agent (single console) model of computing was dying and Jobs knew it. He knew that convincing developers to investigate and integrate network connected software was going to be key.

The computers at NeXT, Jobs explained, were all connected over a network that allowed him access to all of his files, wherever he was. People often point to this as Jobs predicting something like iCloud decades before it became a reality.

What really stuck out to me, though, was that Jobs was appealing to these developers to change the world of computing with their creations. Apple, as he would make it, was going to be a company that pioneered big ideas and monumental changes in the way that computers worked once again, without getting mired in the proprietary technologies and timidity that had caused it to stagnate under John Sculley and later, Amelio.

Just months after that 1997 WWDC, Jobs would announce a $150M investment by Microsoft at an infamous Macworld in Boston. Apple wasn’t out of the woods yet and wouldn’t really start to recover for several years yet, but that was the turning point.

The Apple of today, Tim Cook’s Apple, is a far different company than it was back then. It’s in a position of power, not recovery. But that doesn’t mean that Cook isn’t going to be continuing to push for the company to ‘change the world’. Back then, the best hope for Apple was the developers creating independent software for NeXT signing on to Jobs’ vision and continuing to do the same for OS X.

While there are still innovative and talented developers working on products for OS X, Cook’s plea was directed mainly at those making things for iOS. This is what the video focused on and, frankly, it’s representative of what Apple as a company makes most of its money on these days.

But it also demonstrated that, amongst the fart apps and crappy in-app-purchase scam games, there are also those which are truly beneficial to the world. The next generation of computer users will be touch native, and these computers we carry around in our pockets will likely be the first ones that they use. It unquestionably makes promotional sense for Apple to emphasize that they have the leading development platform, but the push for developers to create things that are worthwhile is an important one.

“The products we make, combined with the apps that you create, can fundamentally change the world,” Cook said, closing out his speech. “And really, I can’t think of a better reason of getting up in the morning.”

Ultimately, Apple is a company that is very good at promoting itself, so the speeches that its executives give are really just well-rehearsed PR pitches. But the contents of this particular pitch are interesting and show that Apple, as the most powerful tech company in the world, is at least taking responsibility for its position and encouraging developers on its platform to make tools that help people improve their lives.

There are still a lot of questions unanswered about the future of the App Store, including how Apple will create an environment that singles out and fosters good software. It also needs to revisit the way that it treats developers when it comes to communication with regards to app rejections. And then there are the edge cases when litigation can put those same life-changing apps in jeopardy.

But if this is Tim Cook’s pitch for the future of app development, then there seems to be some hope yet:

“Ultimately, it’s why people choose to come work at Apple, and with Apple. To do the very best work of their lives. To create products that empower people to do great things. To make a difference in the lives of so many people around the world.”

Read next: Bloomberg TV's Deirdre Bolton talks to us about the current technology investment trends