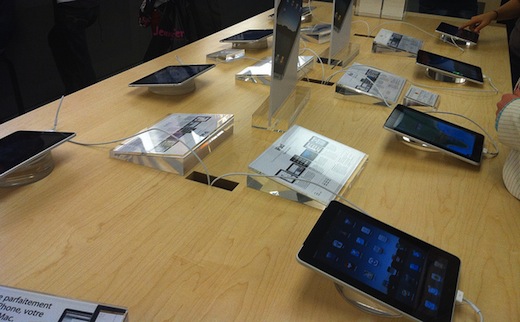 This morning, conveniently on the first day of WWDC week, digital marketing and media research agency eMarketer published some projections about the market share of Apple’s iPad tablet(s) in the United States.

According to eMarketer, iPad use will nearly double this year, with an increase of 90 percent to 53.2 million users in the US by the end of 2012, as new buyers emerge and existing users replace older models. As you’d expect, annual growth rates are actually decreasing – and are projected to continue dropping – as the absolute numbers get bigger and competition heats up.

By 2015, eMarketer says there will be almost 91 million iPad users in the United States, or nearly a third of its total population.

This year, the firm also estimates, the iPad will continue to be in the hands of more than 76 percent of all tablet users in the US.

And whatever the ‘post-PC era’ is, it looks like we’re increasingly living in one: compared to iPads, eMarketer projects overall tablet penetration to rise even more rapidly, to reach 29.1 percent of Internet users by the end of this year.

Broken down by age, the fastest growth among tablet users as a whole will come in the under-12 and 65-and-older age groups. Those most likely to use a tablet will remain between the ages of 25 and 44, according to the research firm.

eMarketer further estimates more than half of tablet users this year to be men (54 percent), but by 2015 forecasts the gender split to become even.

Also read: comScore: A quarter of US smartphone owners also use a tablet

Read next: LeWeb London is almost here, and you can win a free ticket