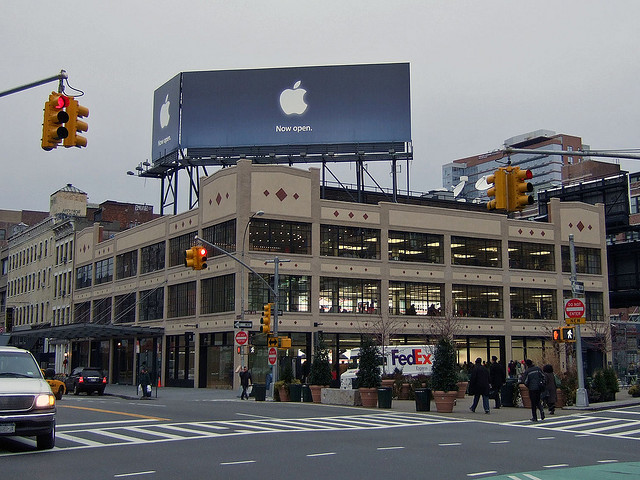 In a rare event partnership, Apple will be participating in the upcoming Tribeca Film Festival in New York City by holding events and workshops at its West 14th St. and SoHo stores.

These events are open to the public and completely free:

The Apple Store, West 14th Street, and the Apple Store, SoHo, are proud to take part
in the 2012 Tribeca Film Festival. To celebrate the spirit of independent filmmaking, we’re hosting free events and workshops from April 20 through April 28. And everyone’s invited to attend.

Grab a seat for an exclusive Meet the Filmmakers session — presented by Apple and Indiewire — and hear the film industry’s leading actors, writers, directors, and producers discuss their latest projects. Or you can attend a What’s New in Filmmaking event — or one of our other great workshops — offered during the festival. And be sure to download the official Tribeca Film Festival app from the App Store.

In a “meet the filmmakers” series, names like Julia Louis-Dreyfus, Morgan Spurlock, and Will Arnett will be participating in interactive discussions with the audience.

Some of the topics being discussed, heavily focused around Apple products of course, during workshops will be; Getting started with iMovie for Mac, iWork for Filmmakers, Using Social Media for your Film, and training for Final Cut Pro X.

The events start on April 20th and will run into the 28th, and you can get the full schedule from Apple’s retail site.

I’ve been in both of these stores and I can assure you that they’re massive, so there will be plenty of space for most people that are interested. Having said that, there will likely be lines forming to catch the likes of Louis-Dreyfus and Spurlock, so get ready.

Read next: Internet Explorer is changing, but does it deserve a second chance?