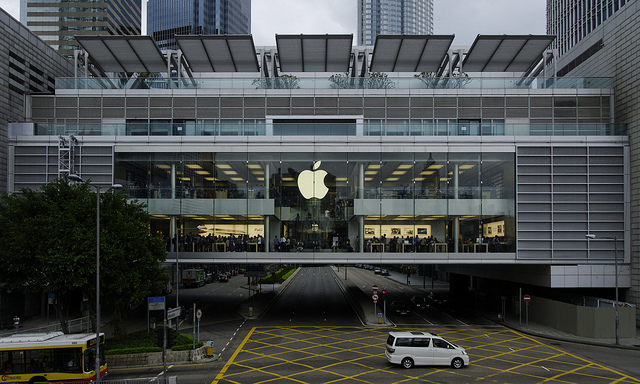 Sales of new Apple products in Asia are blighted with sophisticated scalping operations and healthy demand for aftermarket sales. So, before it debuts its new iPad in Hong Kong on Friday, the company appears to have begun fixing notices in the areas surrounding its flagship store at the IFC Mall, warning scalpers they won’t be able to purchase an iPad on a first-come-first-serve basis.

But that’s not stopping them, not at all.

Engadget China reports that despite notices being placed outside the store and on connecting footbridges, scalpers are not moving and continue to camp outside of the IFC Mall, despite warnings from the Police that they need to leave the area.

No staying or queueing up here. Apple will not serve on a first come first serve basis for new iPad. Please refer to Apple’s official website for the detailed arrangement.

It is believed scalpers are working to circumvent the Reserve and Pickup program that Apple has introduced in the country to ensure that customers are able to secure an order for a new iPad device, by tying orders to an individuals name, address and their government-issued photo ID.

However, it is more likely that scalpers will approach customers visiting the store to pickup their preordered iPad and offer them an inflated sum of money in exchange for their new purchase.

Apple will allow customers to preorder their iPad via its Reserve and Pickup service from Thursday morning. Customers will be able to place an order but they must wait for a notification from Apple to confirm the order has been placed. This is likely a check that Apple performs to ensure that customers are making multiple purchases.

With chaos descending on its retail stores at the launch of the iPhone 4S in China, Apple introduced the new reservation ticketing system on its Hong Kong website in January. Customers were given then chance to reserve the iPhone between 9am and 12pm, notifying them by email before 9pm, providing them with a time to pick up their device the following day.