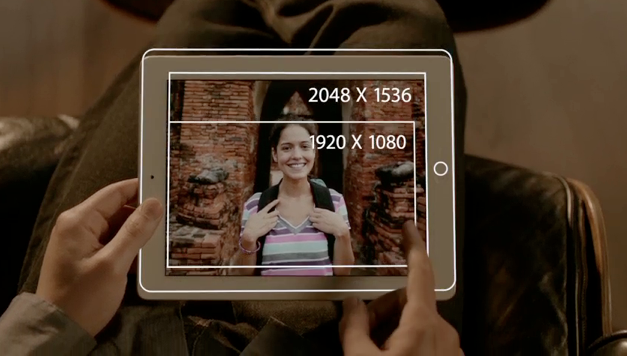 The new iPad’s Retina Display was perhaps the most expected feature to be included in Apple’s new tablet, especially after it incorporated the high-resolution display into both its iPhone 4 and iPhone 4S smartphones.

But don’t let that take away from the fact that the technology behind its iPad display isn’t impressive, far from it.

Apple’s new iPad display has four times as many pixels as the iPad 2 display, combining to form a 2048 x 1536 resolution with 3.1 million pixels and boasting 44% greater colour saturation. In Apple’s words, it’s “the best display ever on a mobile device.”

With so many pixels comes the opportunity for interference, when “signals get crossed and image quality suffers.” Apple says that in order to make sure that the iPad screen remained crystal clear, its engineers “elevated the pixels onto a different plane — separating them from the signals. It’s technology that’s breakthrough. Just like the new iPad itself.”

That’s Apple’s marketing department telling us the magical things the company had to do to incorporate a Retina Display.

So, how does it hold up?

To clarify matters, DisplaySearchBlog decided it would do its part to educate Apple fans. When Apple says it has “elevated the pixels”, what it really means is that it used SHA (Super High Aperture) pixel designs.

This involves applying “a 3 µm thick photo-definable acrylic resin layer to planarize the device,” therfore increasing the gap between the pixel electrodes and signal lines. As a result, Apple is able to enjoy limited cross talk, so image quality and aperture area is increased. It also explains why the iPad display can operate such a high resolution with increased brightness.

SHA technology was developed by Sharp and JSR years ago and has found its way into at least 25% of LCDs in operation today.

The iPad’s Retina Display is not the same as the display iPhone 4 and iPhone 4S, they differ in terms of pixels-per-inch – the iPad has 264 ppi, with the iPhones both sporting 326 ppi. It isn’t known what Apple’s definition of Retina truly is, but it’s safe to say that they have a very high resolution (and almost certainly means you can’t see individual pixels with the naked eye).

Sharp is also credited with being one of three display makers in Apple’s supply chain that contributed panels to Apple for its new iPad. Again, DisplaySearchBlog lends its expertise to offer its thoughts on who supplied what for Apple’s new tablet, but also what is used to maintain the brightness of its Retina Display.

Double the number of LEDs

Prior to the launch of the new iPad, Sharp, Samsung and LG Display were all rumoured to be suppliers for Apple’s new display. Richard Shim at DisplayBlogSearch concurs, suggesting that Sharp was originally producing its IGZO TFTs but had issues maintaining manufacturing yields for the panels.

Instead, Samsung and LG are said to be supplying the new panels, using a-Si TFT technology. According to Shim’s research, the Retina Display’s 264 ppi metric is pushing the upmost limit of what the technology can output.

To boost brightness, Shim says that the new iPad uses at least twice as many LEDs than the iPad 2, totalling at least 72. With more light sources, the iPad consumes more power, so Apple has worked to add more battery capacity to its iPad.

The iPad 2 sported a 6,944 mAh battery and set the standard for tablet battery life, at around 10 hours.

The new iPad has as much as 70% more capacity with a 11,666 mAh battery pack, which not only helps mitigate the increased LED power consumption but also help maintain 9 hours of charge when used on a 4G LTE network.

There’s some impressive technology inside of Apple’s new iPad, most of which the average consumer will never come to understand thanks to Apple’s simple and effective marketing strategy.

The Cupertino-based company wastes no time with spec sheets and model numbers. Rather, it explains how the device works in easy-to-understand language, using gimmicky labels and names so customers remember the features that make its products special.

Read next: The Next Web goes hands-on with the new Nike+ FuelBand