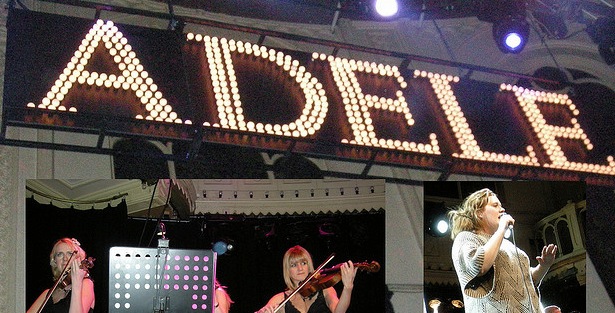 Columbia records announced today that Adele has become the first artist to rack up double platinum sales on iTunes reports Jim Dalrymple at The Loop. The company’s press release lays out some impressive stats regarding the artists’ sales, especially since her six Grammy Awards.

Adele passed up the 2 million download mark on the US iTunes store of songs including her hit record ’21’. The album simultaneously becomes the longest running #1 by any woman in Billboard history, with, you guessed it, 21 weeks at the top spot, non-consecutively.

The album sold 730,000 copies in the last week since her Grammy appearance and wins, which come exactly one year after its release.

The singer underwent vocal surgery several months ago and thanked her doctors from the Grammy stage after tying Beyoncé for the most awards by a female artist in a year. She also tied Eric Clapton’s record for awards to a British artist.

The album 21 itself has also sold almost 2 million copies.  The 2 million download mark being crossed within a single year of it being released earns her the honor of being the first double platinum artist on Apple’s iTunes service in the US.

Apple reported a record revenue in Q1 2012 of $1.7 billion from the iTunes Store.Last December, Apple pushed their iTunes cloud music services out to many Latin American countries, including Brazil and brought the services to Japan just yesterday.

Read next: Method & Craft’s video tutorials can help make you a Photoshop pro