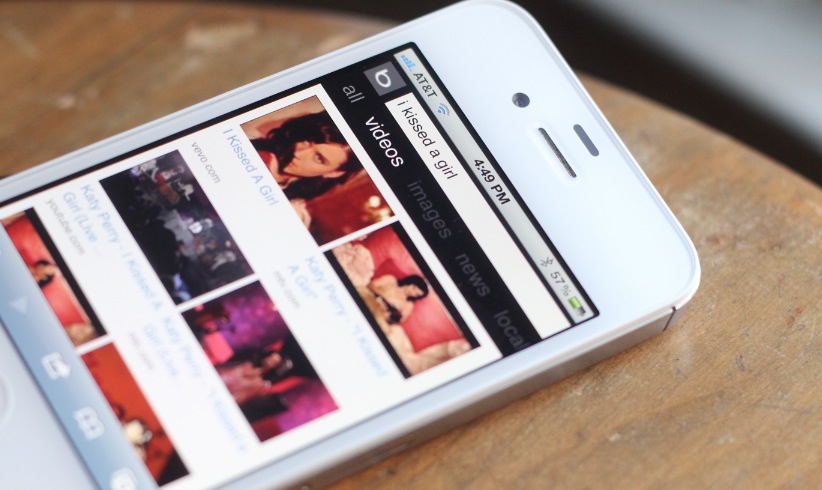 By the time that Microsoft announced its Bing search engine in 2009, Google had long since become a verb and several failed attempts at the search game were under the bridge. But Bing was something different, a visually appealing and more friendly alternative to the nation’s nerdy search giant.

Bing Mobile brought many of the things that made its desktop counterpart different to smartphones and tablets. It’s the only competing product with the budget and resources to take on Google in the mobile space and give it a run for its money.

I’ve been tiring of Google’s shenanigans in many areas of search lately, especially the way that its Google Search + Your World changes have driven some of the best search results further down the list it coughs up.

I have also been thinking about the ways that Apple has been trying to divest itself of its various ties to Google. Out of all of the ways that Google products are used on the iPhone, Search and Maps are probably the hardest for Apple to extricate itself from.

Apple is already working on what is, at least judging from acquisitions, a technically superior version of Maps built specifically for iOS devices. But you can’t build a search engine in a day, or even in a couple of years. So the only viable option is to change the default iPhone search engine from Google to Bing.

So I decided to take Bing for a spin, changing it to my default search engine for a month or two. What I found was that it actually could be a very solid alternative to Google for a large portion of iPhone users, and that it might even be a better fit for the majority of those than Google is.

If I had to pick one place where I found that Bing excelled it was when performing ‘regular’ daily searches. Where is a coffee shop near me? Why am I hearing so much about such-and-such public figure lately? What are the movie times for today?

In almost all cases Bing was able to produce results for these searches that were just as relevant as the ones that Google was giving me, but were presented better. There was less cruft up top that weighted older content ahead of more relevant content from the last few days when searching for Arnold Schwarzenneger, for instance.

Bing returned results about the actor and former governor’s trip to India right up at the top, while I had to wade downwards through a Wikipedia entry and his official page on Google. Images were also placed above news results on Google, where they were shoved below them and the official pages on Bing.

Image searches for the actor returned a nice array of choices and both were presented well, with the Google and Bing variations on the endless gallery nearly indistinguishable from one another.

When performing ‘on the run’ searches like movie times, both Bing and Google, with its newly improved movie options, performed admirably with extensive movie and theater selections and prominently displayed times. Both engines pretty much nail movie times now.

Just plugging in coffee gives you local results in both engines, with a map of the available locations displayed prominently. Interestingly, Google weighted the corporate listing, Starbucks, ahead of the local Echo Street Coffee that Bing provided. But either way a decent array of local options, even without having to tap the ‘local’ button.

With a search for ‘Kyle Richards’, a reality TV star culled from my wife’s browser history, Google won pretty handily as it returned a bunch of news articles in a section right at the top with the latest story posted just an hour ago. Bing’s first result was also news, but it was from a week ago. Not terrible but probably less helpful because a search for her would likely be for the ‘latest gossip’.

For day-to-day stuff, watercooler news, movies, coffee and food, both Bing and Google performed fairly well. I prefer Bing’s presentation as it is more monochromatic with a cleaner and less cluttered layout, but Google’s look is likely so familiar to most that they don’t even notice how crowded it has become.

Outside of the normal realm of daily information, I expected Google to win handily. These ‘geeky searches’, exemplifying times that you need to perform a a calculation quickly, get a how-to or find some obscure document or reference chart. But Bing did itself fairly proud, holding its own in almost every occasion.

When searching for ‘iOS HIG’ (the Human Interface Guidelines that Apple produces for developers making apps) Google returned the HIG right up front with links to sections. Ostensibly more helpful than what Bing gave me, which was an ad, the Apple Library entry with the word ‘Loading…’ as a title and a copy of the HIG that had been copied over to Scribd.

A search for ‘reset network settings iPhone’, though, gave me pretty solid results on both devices. The Bing version gave me a Cnet article about troubleshooting problems on the original iPhone (see the EDGE reference) and the second result was actually an article written by yours truly (thank you very much), which I am a bit biased about but feel is pretty relevant.

The Google search gave me an official AT&T support document and a troubleshooting article from TUAW. Also both acceptable responses. Another draw in a search where I expected Google to excel. I performed a search for defragging on both engines and got pretty similar results.

A currency conversion calculation is an ideal search engine test as it’s exactly the kind of thing that you would plug into a field and ‘hit go’ on while you’re on the run. It requires that the engine understands what you mean, knows what the currency conversion rate is and can deliver it in an easy-to-read fashion.

This is a prime example of a search engine being technically accurate but not as well tuned to mobile. If you’re searching for a conversion rate on your phone, it is likely that you’re traveling and may even be right in the middle of a transaction. This calls for the lightning fast return of accurate information, not a link that you have to follow further.

So the geek quotient of Bing’s searches wasn’t nearly as fine-tuned as Google’s. More complex or obscure searches are really the kind of things that Google does so very well. Bing has a ways to go before it has polished up this area and Microsoft is likely not as concerned with this ‘1%’ of its users and more interested presenting common searches well.

Bing maps may be good on the desktop, and I feel that they are very, very good there, but the mobile versions of them are almost comically bad when compared to Google’s. If you do a search on Bing for ‘maps’ it displays its own mapping option behind Google, Yahoo and Mapquest, and that’s pretty much where I think that they belong.

It’s not terrible, but a confusing layer engine, highly compressed map images and strangely laggy navigation make this a poor substitute for Google’s maps. The native app’s wrapper probably does a lot to help the perception of Google Maps as a superior solution, but even in its web form it’s a far superior product to Bing Maps.

This is especially frustrating considering that the version that ships with Windows Phone 7.5 Mango is so good. I loved it when taking the Nokia Lumia 800 for a spin and found it to be a valid substitute for Google’s product, although the Nokia Maps addon was perhaps still a bit better.

Is it good enough?

If you’re looking to switch away from Google’s products to alternatives, or are interested in how ready Bing may be for the average iPhone user to switch to should Apple make a deal to swap out Google as the default, the answer is, generally, yes.

It’s a valid and full-featured alternative to a large portion of the searches that you’ll do on your iPhone from day to day and will likely give you solid results for all but the geekiest of search terms.

The design is largely cleaner and more attractive than Google’s more cluttered results, and more preview text helps you decide on which link to follow. But, if you’re even reading this article there’s a good chance that Bing isn’t really being made for you.

Instead, Microsoft seems to be heavily targeting the ‘99%’ of mobile searchers. Those who will be looking for a restaurant close by, seeing what Lady Gaga is up to now or what the score is on the game. This is smart, because it’s exactly who Apple is targeting with the iPhone.

The iPhone appeals to those who like things that are simple, easy to use and as ‘fuss free’ as possible. This is a major component of why Apple sells millions of iPhones and can barely keep up with demand and why, when asked for advice, many beleaguered geeks will indeed tell their relatives to ‘just buy an iPhone.’

If it intends to fit his bill well, then one area it really needs to concentrate on is Maps. There is no excuse for how poor the product is in Mobile Safari and it’s definitely the weakest link when compared to Google’s offerings.

For now, Bing remains my default engine, but is probably just a very strong second place for most people. But it honestly wouldn’t take too much to tip the scales for a very large portion of the iPhone-using population. Just get those maps in order Microsoft, and we’ll talk again.