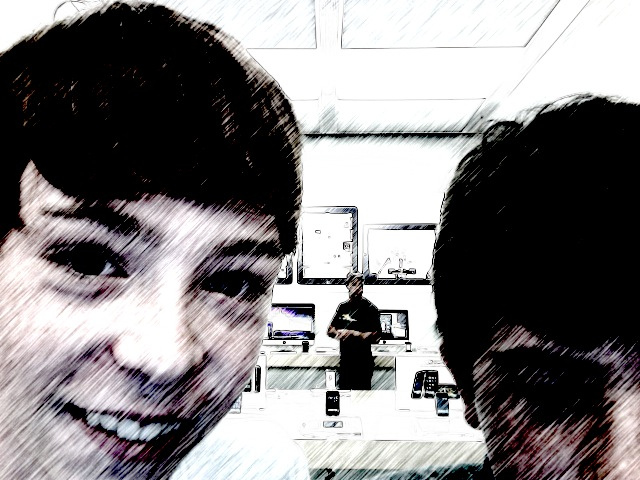 Every day, hundreds of people enter their local Apple Store, try out some of the products on offer and for some unknown reason, decide to snap a photo of them posing in front of the latest iPhone, iPad or iPod on display.

Wired alerted us to a new project by Irby Pace, who decided that he would take those photos — over 1,000 in total from stores across Texas and New York City– and create an exhibition out of them called “Unintended Consequences”.

Noting that “customers are disregarding their own discretion and abandoning these photographs,” Pace began entering Apple Stores and emailing the snaps to himself for later use. Finding it was a lengthy task, he then utilised a transfer tool to copy all of the photos stored on Apple Store devices to his own iPad.

We can hear your ethical senses tingling.

Pace justifies his use of the photos by stating that “since these images are anonymous the participants can represent themselves however they chose to without scrutiny,” adding that by taking the images, he “explores the change in behavior when people do not consider how these images will be used.”

The result is a gallery full of images like this:

Wired points out a similar project, that got its owner investigated by the FBI:

Last year a similar art project by Kyle McDonald called People Staring At Computers used software that McDonald installed on Apple store computers to detect faces and capture an image every minute. Over 1,000 captures were automatically uploaded to McDonald’s computer and then posted to a (now shuttered) Tumblr account.

But where McDonald’s stunt garnered him a home visit from the FBI and got his laptop and flash drives confiscated, the only question hanging over Pace seems to be whether the images he extracted are the legal property of Apple. Pace said Apple store staff were not particularly vigilant: “None of them seemed interested at all in what I was doing. One employee in New York questioned what I was doing but I told him that I was merely comparing the products.”

Pace’s project differs in the fact that he didn’t install spyware and relied on Apple Store visitors capturing photos, whereas McDonald’s did so without the persons’ permission.

It raises an interesting ethical question; is it right for Pace to use the photos because visitors to the Apple Store actively chose to leave them on the devices or is it wrong for him to use media that he does not have the rights to, nor does he own?

Imagine visiting the Cora Stafford Gallery in Denton, Texas and seeing yourself in your full glory on the wall.