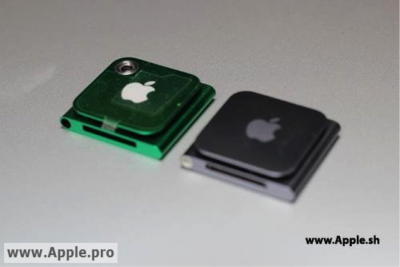 A camera on the teeny tiny iPod Nano? Maybe, if these spy shots posted by Japanese blog Apple.pro are any indication. The shots show a casing that is very similar in size and shape to the standard iPod Nano we know now, with the addition of a small portal ostensibly for a camera.

The hole drilled in the back continues on through the clip and matches up with images from a patent filing revealed late last year by Patently Apple for a tiny piezoelectric speaker to be integrated into the clip. In that filing, the Nano is shown to have a similar hole drilled through the clip to create a passthrough for the camera.

So it would appear that Apple has at least been exploring its options when it comes to including a camera, which would likely be in the 1.3 megapixel range due to the small size of the Nano’s casing. The hole being placed in the clip would indicate either a passthrough or perhaps a lens that   coupled with the lens embedded in the main body. Any thoughts of the camera being mounted to the clip and separated from the body are impractical at best.

The appearance of physical prototypes like the ones Apple.pro has uncovered indicate that the feature has made it out of the patent zone, through the Apple labs and into the product prototype cycle. Whether it will show up in the final product remains to be seen, but Apple.pro has proven its ability to get ahold of early prototype information in the past.

Read next: Foodspotting relaunches as a discovery app for finding places to eat, rivaling Yelp